Quarters commemorating Cumberland Gap National Historical Park in Kentucky enter circulation in April 2016, and United States Mint facilities in Philadelphia and Denver will make them. The U.S. Mint will also produce collector versions in proof quality from San Francisco. This article presents photos of proof Cumberland Gap quarters and the dies used to strike them.

The Cumberland Gap quarter for Kentucky is the 32nd issue in the U.S. Mint’s series of America the Beautiful Quarters, and the second for 2016. Created by Barbara Fox and sculpted by Joseph Menna, the winning design was selected from among five candidates. It depicts a frontiersman gazing across the mountains to the West. The scene is symbolic of pioneers who used Cumberland Gap to journey into the western frontiers of Kentucky and Tennessee. Inscriptions around the design read: CUMBERLAND GAP, KENTUCKY, 2016, E PLURIBUS UNUM and FIRST DOORWAY TO THE WEST.

Unlike coinage found in change, proof coins are uniquely manufactured to have frosted designs and mirror-like backgrounds that combine for an appealing cameo affect. Below are photos of a proof Cumberland Gap quarter. They’re not as clear as we’d like, frankly — and we apologize for that, but you can still see the design and telltale signs of the proof finish. 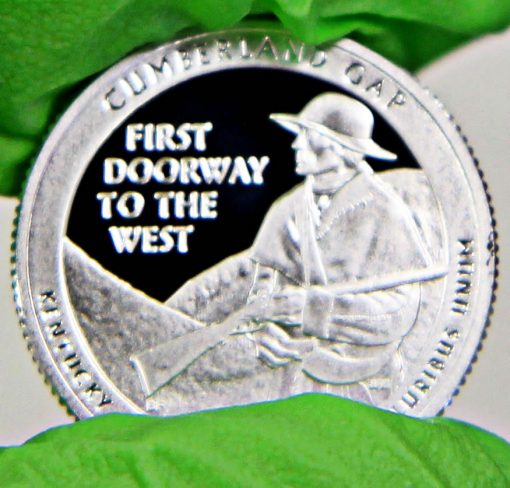 Specially prepared and polished dies are used to produce proof coins. Dies have a coin’s design in negative and are placed in coining presses to stamp blanks into coins. Below are photos of a die that bears the negative reverse design for the Cumberland Gap National Historical Park quarter. 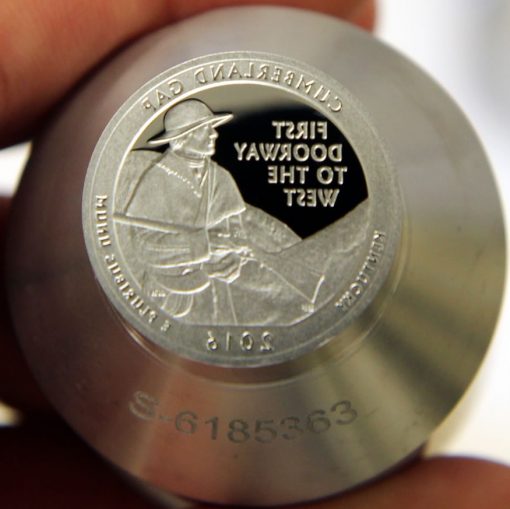 The Cumberland Gap quarter launches into circulation in early April. Here are time and location details for its official ceremonial release: