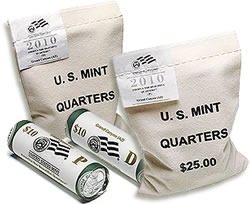 The coins are the fourth release in the debuting America the Beautiful Quarters™ Program which will feature at least 56 different designs that honor national parks and other national sites at a rate of five each year until 2021.

"The bags and rolls contain coins that were struck on the main production floors of the United States Mint facilities at Denver and Philadelphia for use in general circulation," the US Mint describes. "The two-roll set includes one roll each of 40 coins-one each bearing the ‘P’ and ‘D’ mint marks-wrapped in distinctive packaging displaying the name of the national park or site, state abbreviation, mint of origin, and ‘$10’, the face value of its contents. A tag is attached to each 100-coin bag denoting the mint of origin, name of the national park or site, and the state abbreviation."

The quarter’s reverse, designed and sculpted by Phebe Hemphill, features a view of the granaries above the Nankoweap Delta in Marble Canyon near the Colorado River. Inscriptions include GRAND CANYON, ARIZONA, 2010 and E PLURIBUS UNUM.

The design featured on the coin’s obverse is the 1932 portrait of George Washington by John Flanagan, restored to bring out subtle details and the beauty of the original model. Inscriptions include UNITED STATES OF AMERICA, LIBERTY, IN GOD WE TRUST and QUARTER DOLLAR.

An official quarter ceremony will actually occur tomorrow, September 21, at 1:30 p.m. (MST), on the park’s South Rim, between Hopi House and Verkamp’s Visitor Center. Children 18 years old and younger in attendance will receive a free quarter-dollar while others may exchange cash for rolls of the coins.

The ceremony will be broadcast live on the web at: http://www.americathebeautifulquarters.gov/.  The stream will be available at 1:25 p.m. (MST).

The final 2010 America the Beautiful Quarter will be available in November and features Mount Hood National Forest in Oregon.

Hi, I do some work for the US Mint. For those who are curious, the 56 quarters being released over the next 12 years are sites from all 50 states, the District of Columbia and five U.S. territories. If you want to know if a national park or other site near you is next, go to http://bit.ly/atbquarters for more information.

[…] for $10 rolls of the new quarter-dollars for adults who wanted them. (The public can now purchase bags and rolls of the coins directly from the US […]