Harpers Ferry National Historical Park of West Virginia will be commemorated in 2016 under the United States Mint’s America the Beautiful Quarters® Program. As part of the quarter series, the U.S. Mint at San Francisco produces special proof quality versions for coin collectors. This short article presents photos of proof Harpers Ferry quarters and the dies used to make them.

We’re able to offer an early glimpse of next year’s quarters thanks to a recent visit to the San Francisco Mint. We went to see a new packaging system — we’ll talk about it later, but we were also thrilled to photograph and even make some 2016-dated proof coins.

When issued, the Harpers Ferry coin will mark the 33rd release from the America the Beautiful Quarter series and the third for 2016. Created by Thomas Hipschen and sculpted by Phebe Hemphill, the winning design was selected from among eight candidates. It depicts John Brown Fort, the site of John Brown’s last stand during his raid on the Harper’s Ferry Armory. Inscriptions around the fort read HARPERS FERRY, WEST VIRGINIA, 2016, and E PLURIBUS UNUM.

As seen in these photos, the proof quality quarters showcase mirror-like fields and frosted devices. Collectors typically seek sets of proof coins owing to this finish and their enhanced level of detail. 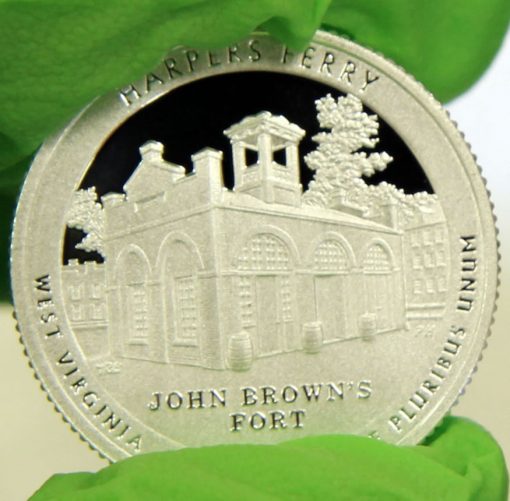 To strike the coins, the U.S. Mint uses special dies created through an intensive procedure that marries advanced technologies with the artistic talent of individuals who work at the San Francisco facility. Shown below are a few images of some of the dies used to strike the Harpers Ferry National Historical Park quarter. Notice that they have a negative design. That’s so they can impart a positive image when stamping a blank to become a coin. 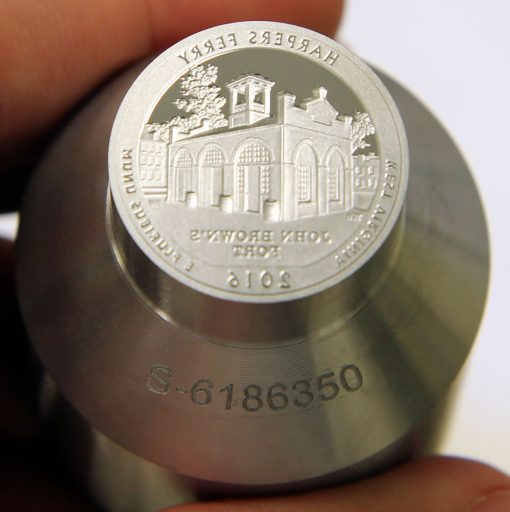 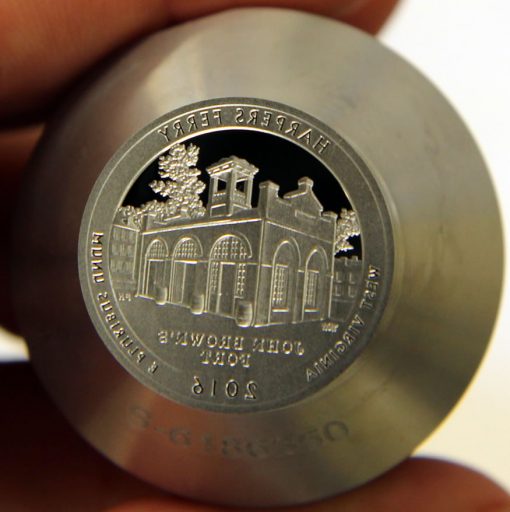 The Harpers Ferry quarter launches into general circulation in June 2016. Here are time and location details for its official ceremonial release:

Generally, these launch ceremonies include a few short speeches from associated dignitaries. Following the ceremony, a coin exchange is offered where individuals can trade cash for rolls of the new quarter-dollar.

John Brown was convicted of treason and hung. Is this the first time a coin has contained the name of such a person?

I think it is David. He was convicted by the Commonwealth of Virginia for inciting a slave insurrection among other things. It’s a bit of a controversial time right now to print this one in the midst of racial tensions throughout the nation. But it runs deep into our cultural makeup. Was he a hero or villain? Hopefully it won’t stir the pot of hate. Hopefully it will incite harmony before I slide it down the snack machine.

I hate to sound like such a nerd but before the mint decided this did they take into account how the fireman’s living quarters was originally on the other side of the building? Currently it does look this way but before it was moved multiple times the smaller room was on the other side. The one’s who restored it were looking at a reverse image and built it the opposite way. If we want to go with the current look of which the background depicts, this is great but if we wanted to go with the historically accurate look, the… Read more »