The United States Mint today published the production figures for the Yellowstone National Park Quarter — the second issue in the new America the Beautiful Quarters™ Program. 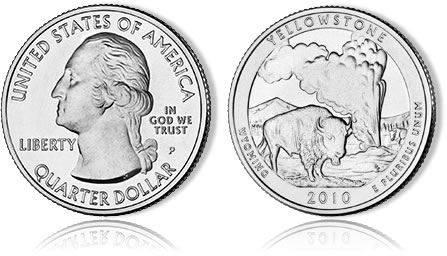 The circulating mintage total for the quarter-dollar is 68.4 million, with 34.8 million struck in Denver and 33.6 million from Philadelphia.

The two 2010 quarter mintages total to 128 million. Those from Denver account for 63.8 million while Philadelphia is a bit heavier at 64.2 million.

When the 50 State Quarters Program™ launched in 1999, the very first Delaware coin had a production run of 774.82 million — six times the amount of the first two America the Beautiful Quarters combined. The final 1999 Connecticut quarter paints a starker picture, with more than 1.3 billion struck for circulation.

The U.S. Mint indicates the numbers are "preliminary production figures only" and that the final ones will be "issued in January 2011." Still, it is clear the America the Beautiful Quarters will be handicapped, at least in their start, by a lagging American economy that is currently requiring fewer coins for transactions.

In another contrasting example, last year’s District of Columbia and U.S. Territories Quarters Program™ was also seriously affected by the economic downturn. Yet, the DC quarter hit 172.4 million. The final Northern Mariana Islands issue was the lowest of 2009, but still came in at 72.8 million.

For collectors, the weaker production runs make the coins more attractive, and may heighten the interest in circulating Hot Springs and Yellowstone National Park Quarters in bags and rolls. The Mint sells these directly on its website (http://www.usmint.gov/).
Their newest sales figures, as of July 4, 2010 follow:

The Hot Springs products launched on April 21, 2010, while the Yellowstone products were released on June 1, 2010.

As a comparison, the no longer available Northern Mariana Islands bag and roll sales follow:

The next Yosemite National Park Quarter will be released into circulation on July 26, 2010.