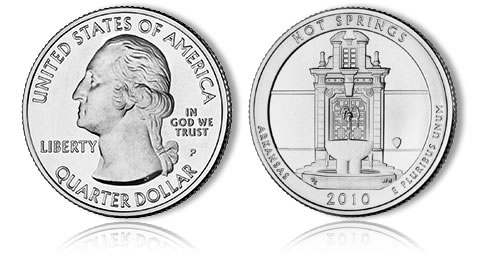 The mintage total for the quarter is 59.6 million, with 29 million struck in Denver and 30.6 million from Philadelphia.

While the U.S. Mint clearly indicates that the numbers are preliminary and that the final ones will be issued in January 2011, the current levels represent the lowest of any quarter in decades — from either Mint facility.

Coin production has plunged in parallel with the American economic downturn, but did begin to somewhat pick up in April. More coins were struck during the month than in any other in 2010. It was also the first time that any nickels had been minted since July 2009.

The April figures showed a total of 77.4 million quarters were produced, with 35.4 million from Denver and 42.0 million from Philadelphia. At that time, it was incorrectly assumed Hot Springs quarter production was still ongoing since their mintages were not reported separately.

The lower levels will make the coins harder to find in circulation, and may attract more collectors to purchase Hot Springs National Park Quarter bags and rolls directly from the Mint.

Interestingly, individual opening product sales were already better for them than the prior Northern Mariana Islands Quarters, which up until today had been known as the scarcest quarters to circulate in decades. A true bag/roll comparison is not possible given that the Mint then sold 1000-coin bags, but does not offer them today.

The newest weekly Hot Springs bags and roll sales have not yet been released by the Mint, but the latest available (as of Sunday, May 16) figures follow:

As a comparison, the no longer available Northern Mariana Islands bag and roll sales follow:

The production figures for this month will be even more fascinating. Those will not be available until early June.

Well, if my workplace made 1677114200 quarters so far in 2011, why are you slowpokes even minting? It wouldn’t be much less if you stopped minting.