Annual America the Beautiful Quarters™ Sets have opened to stronger sales than their companion 2009 quarters sets. 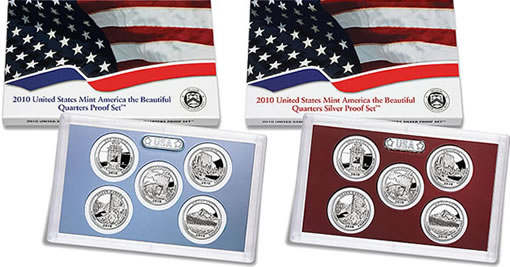 This year’s first two sets recently launched and while their sales cycles are young, the fact that they debuted to stronger demand despite their later than normal releases and during historically slower months for the coin collecting community bodes well for their acceptance.

The 2010 silver sets which contain 90 percent silver versions of the quarters launched most recently. The United States Mint issued them Thursday, May 27 for $32.95. Debuting figures show that by Sunday, May 30, a total of 73,756 were sold.

In contrast, the 2009 District of Columbia & U.S. Territories Quarters Silver Proof Set™ was released in a more active month of March. Issued on a Monday (March 23), their sales only reached 55,160 by the following Sunday. Despite the three extra days when their opening sales figures were reported, 18,596 less were purchased. A full week later they were only slightly ahead at 75,301. Their latest sales stand at 281,051, advancing 697 last week.

Again in comparison, the 2009 District of Columbia & U.S. Territories Quarters Silver Set™ launched January 5, 2009. Collectors are typically much more active with their spending dollars in winter months. The sets debuting sales between their Monday release to the following Sunday was 78,015. That is only 2,457 more than the 2010 sets despite the 3 extra days. The 2009 clad sets picked up 616 during last week to hit 610,466.

Each of the 2010 quarters sets include proofs of the:

These first five coins from the America the Beautiful Quarters series honor the national parks and site located within the states of Arkansas, Wyoming, California, Arizona and Oregon.

I have a NGC 70 silver proof Grand Canyon that the L in liberty and all the letters in Quarter Dollar are double die. Has any more Surfaced yet?