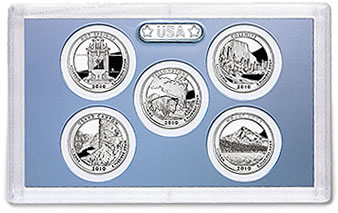 The coin compositions are the same as their circulating versions — 8.33 percent nickel with the remaining copper.

What sets them apart is the special manufacturing process each quarter undergoes in order to attain a proof finish that is extraordinarily brilliant and more detailed.

The 25-cent pieces are also struck in San Francisco and bear the "S" mint mark. Circulating quarters are manufactured in Denver and Philadelphia and include corresponding "D" and "P" mint marks.

The United States Mint first offered separately packaged quarter proof sets in 1999 during the inaugural year of the 50 State Quarters Program. The original 5-coin set was priced at $13.95, which is more than $18 when adjusted for inflation at today’s rate. This year’s set is a steal by comparison.

The 2010 America the Beautiful Quarters Proof Set will not be the only way to purchase the clad coins in proof. On Tuesday the US Mint updated its 2010 schedule to include the July 22, 2010, issue of the 14-coin 2010 Proof Set. It includes the same quarters, as well as proof versions of the other circulating coins issued this year — the four Presidential $1 coins, the Native American Dollar, the Kennedy half-dollar, the Roosevelt dime, the Jefferson nickel and the Lincoln cent. The 2010 Proof Set is more expensive, however, with an expected price tag of $31.95.

As of this writing, the Mint has not stopped selling last year’s 2009 District of Columbia & U.S. Territories Quarters Proof Set. (The most recent sales figures show that collectors have purchased 608,830 of them.) In the past the Mint has usually ended the sale of an old set when a new one was released.

However, this year the practice looks to be changed somewhat. The Mint on Wednesday announced a "Last Chance" sale which has hard cut of dates for other 2009 sets as well as the six 2009 First Day Quarter Coin Covers.

Customers can purchase the America the Beautiful Quarters Proof Set directly from the Mint website or by calling its toll-free number at 1-800-USA-MINT (872-6468).