The fifth major numismatic product to contain this year’s five America the Beautiful Quarters™ is the 2010 Silver Proof Set. It also includes the collector versions of this year’s nine other circulating coins, for a grand total of 14 coins. The set went on sale August 26, 2010, at noon Eastern Time. 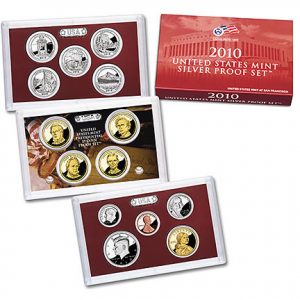 As the name of the set indicates, several coins are struck from 90% silver, a composition in the days of old referred to as coin silver. The pieces minted from the precious metal are the 2010 Kennedy Half Dollar, the 2010 Roosevelt Dime and the newly designed 2010 America the Beautiful Quarters.

The 2010 set includes proof strikes of the fourteen 2010-dated circulating coins, which in the order of their face value are:

This year’s annual set is expected to sell extremely well. Helping sales will be the Lincoln Presidential $1 coin. Newly designed coinage with Lincoln’s portrait have been exceedingly popular. The 2009 Silver Proof Set ended with Mint reported sales figures of 694,406.

Additionally, the new quarter-dollars are significant for the fact that they represent the debut of the America the Beautiful Quarter series. According to the terms of the Act which authorizes them, five new quarters will be struck annually from 2010-2021, with each coin showcasing a National Park or other site of national interest. The program operates in a fashion similar to the State Quarter series which ran from 1999-2008. As such, each state (and the District of Columbia and the five US Territories) will see a site located within its boundaries featured in the program.

The order of the quarters’ release is dictated by the year in which the selected site came under the jurisdiction of the federal government. (See America the Beautiful Quarters Release Schedule.) Accordingly, Hot Springs National Park in Arkansas was the first strike issued since that park has been considered federally owned since 1832. The other quarter dollars in 2010 include the Yellowstone National Park in Wyoming Quarter, the Yosemite National Park in California Quarter, the Grand Canyon National Park in Arizona Quarter and the Mount Hood National Forest in Oregon Quarter.