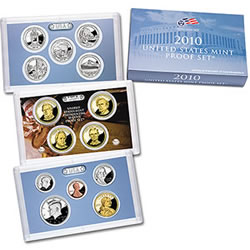 The United States Mint introduced a new series of coins as a follow-up to the successful 50-State Quarters and last year’s District of Columbia & US Territories Quarters. Dubbed the America the Beautiful Quarters™, these new strikes will also be included within several major numismatic products released by the Mint, including the 2010 United States Mint Proof Set®.

This always popular, annual set includes proof versions of all of the circulating coinage issued by the Mint during the year. Accordingly, the fourteen different coins featured in the 2010 Proof Set:

All of the coins are struck to a proof finish. The Mint indicates that "proof coins display brilliant backgrounds, with frosted, sculpted foregrounds," adding that they "receive the highest quality strike possible and can be distinguished by their sharpness of detail and brilliant, mirror-like surface." Each is manufactured at the Mint’s facility in San Francisco, and thus bear the ‘S’ mint mark. The coins are then encased within three protective presentation lenses.

No official imagery for 2010 proof quarters are currently available, probably owing to the fact that the Mint only released the final five designs in late March and then their images in mid April.