The US Mint in the last two weeks has completed its most hectic schedule of product issues for the year. The few remaining days left in November 2010 are expected to be silent ones for numismatic releases.

Six major coin products were issued since mid-November. The following sections include a brief review of each, their debuting sales figures, and a glimpse at the upcoming United States Mint December 2010 products.

Note: All of the described products may still be purchased directly from the US Mint by accessing its online store at http://www.usmint.gov/, or by calling 1-800-USA-MINT (872-6468).

These products offer the option to acquire circulating quality coins without having to rely on local resources, like banks, which can be next to impossible in many areas of the country.

Mount Hood 100-coin bags are available for $35.95. For that price, the buyer has the option to purchase a bag filled with quarters that were produced in the Denver or Philadelphia Mint. The downside is that the bag premiums amount to $10.95 each, or 36 cents for every quarter.

Mount Hood two-roll quarters sets are available for $32.95. One roll contains 40 quarters from Denver and the other roll includes 40 quarters from Philadelphia. As compared to the bags, the premium for the rolls are higher at $12.95, or 41.2 cents per quarter.

Buyers ordered 7,495 of the two-roll sets according to the opening sales figures published by the US Mint.

While the Mount Hood National Forest Quarters started making their way into circulation on a Monday, the United States Mint and the United States Forest Service ceremonially released the coins two days later, on November 17, 2010. For an overview of their launch, read the CoinNews.net article: Ceremony Introduces Mount Hood Quarter. 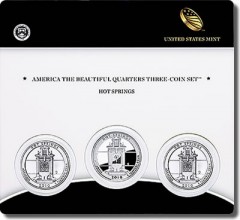 For the price of $13.95, buyers can purchase the collectible Hot Springs Quarter Three-Coin Set which contains two uncirculated and one proof quarter honoring Hot Springs National Park in Arkansas. The coins by mintmark include:

Collectors purchased 10,684 of the Hot Springs Quarters Three-Coin Sets during their first five days of availability.

As shown in the image, each quarter is enclosed within a plastic display card. The reverse of the card offers information on the quarter series, history of Hot Springs National Park, and a certificate of authenticity signed by U.S. Mint Director Ed Moy. The quarter-dollars themselves are encapsulated much like single proof coin products from the Mint, such as the American Silver Eagle and American Gold Eagle coins. 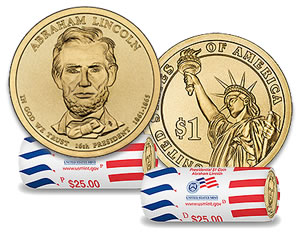 On Thursday, November 18, the United States Mint released rolls of Lincoln Presidential Dollars. The new Lincoln $1 coins were also introduced into circulation on the same day through the Federal Reserve banking system.

The highly anticipated Lincoln dollar enjoyed solid four-day opening sales, with buyers grabbing 34,180 (D) rolls and 33,471 (P) rolls for a total of 67,651. Their four-day sales topped each of the previous 2010 Presidential Dollars all-time sales totals with the exception of the Fillmore Dollar which launched back in February.

The ceremonial release of the Abraham Lincoln Presidential Dollar occurred one day later at President Lincoln’s Cottage located on the grounds of the Armed Forces Retirement Home in northwest Washington, D.C.

"Connecting America through Coins, the United States Mint presents the long-awaited Presidential $1 Coin honoring Abraham Lincoln," said Director Moy at the ceremony, "in the same month that Lincoln won election 150 years ago and became the 16th President of the United States."

The ceremony notably occurred on the 147th anniversary of Abraham Lincoln’s Gettysburg Address.

Friday, November 19, was perhaps the most anticipated day this year for many coin collectors. That was when the 2010 Proof Silver Eagle coin was launched.

Listed for a price of $45.95 and with a household order limit of 100 enforced, buyers flocked to the .999 fine silver proof coins in droves. Opening sales started at 273,212, bringing the Mint more than $12.5 million in sales revenue in three days. The previous one ounce 2008 Proof Silver Eagle had opened at a much slower 185,232. 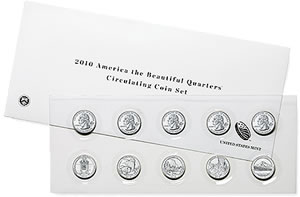 Also on Friday, November 19, the 2010 America the Beautiful Quarters Circulating Coin Set went on sale for a price of $9.95.

The release marked the second of the new annual sets first mentioned above.

The circulating coin set includes standard circulating quarters that would be found in daily change — like Mint roll and bag products, although obviously missing the typical wear and tear such coins can experience.

"This ten-coin set contains the first five America the Beautiful Quarters coins in circulating quality-one of each quarter from the United States Mint facilities at Philadelphia and Denver," describes the US Mint. "The packaging allows the coins to be easily removed and placed into albums or other numismatic accessories."

The $9.95 price represents a premium of $7.45, or 99.5 cents per quarter. While it is the highest of the Mint’s circulating quarter offerings, the product is also the least expensive way to get each of the 2010 America the Beautiful Quarters from both Denver and Philadelphia. 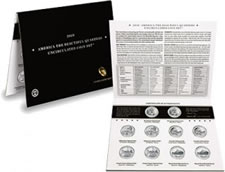 On Tuesday, November 23, the United States Mint launched the 2010 America the Beautiful Quarters Uncirculated Coin Set for a price of $21.95.

It is the final of three new annual sets that was mentioned above.

This set includes 10 collector uncirculated 2010 quarters, with five each from Denver and Philadelphia.

The quarter-dollars are not like the circulating quarters found in rolls, bags, or pocket change. Struck specifically for collectors, they feature a special satin finish.

The following table lists the remaining numismatic products the US Mint currently has scheduled for this year.

While not designed for collectors as they are classified as bullion products, also still awaiting release this year are the America the Beautiful Silver Bullion Coins. These coins feature the same designs as the America the Beautiful Quarters, but are much larger in size (three inches in diameter) and are composed of five ounces of .999 fine silver. This year’s coins include:

The Mint has not announced actual release dates for the bullion coins. The authorization law dictates that they must be issued this year, however. As each is a bullion product, they will not be sold directly by the Mint but instead through its network of Authorized Purchasers just like the bullion American Eagle and American Buffalo products are distributed.