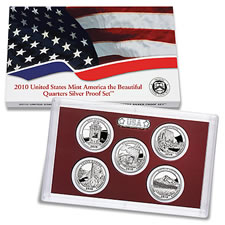 The offering is the first to include America the Beautiful Quarters that are struck in 90 percent silver, which is a reason the set is priced substantially higher than the clad quarters version that launched on May 13, 2010 for $14.95.

In fact, the silver set’s five proof coins are composed of 0.904 ounces of silver. At the current silver spot of $18.47 an ounce, their intrinsic value alone is presently worth $16.70.

The set’s collector coins are struck in San Francisco, bear the "S" mint mark so denoting, and include the:

Each quarter-dollar honors their respective national park or forest within the states of Arkansas, Wyoming, California, Arizona and Oregon. The reverse to tails side of the 25-cent pieces feature designs emblematic of the site they celebrate. 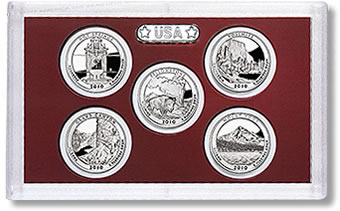 The silver sets are generally popular with coin collectors. As of this writing, the prior 2009 DC & US Territories Quarters Silver Proof Mint Set is still available from the Mint. They were released March 23, 2009. The most recent sales figures indicate 280,354 have been ordered.

The 2010 America the Beautiful Quarters Silver Proof Set can be purchased directly from the U.S. Mint web page, located here, or via the toll free telephone number 1-800-USA-MINT (872-6468).

No limits are in place, but an order will include the standard $4.95 shipping and handling charge. Current information indicates an allowance of 1-2 weeks for shipping should be expected.

The America the Beautiful Quarters™ Program will continue through to 2021 with a total of 56 different reverse designs that depict 48 National Parks, two U.S. Fish and Wildlife sites, and six U.S. Forest Service sites.

[…] The annual sets are a popular offering. The Mint’s latest unaudited coin sales figures for the 2009 Silver Proof Set came in at 694,406. A reason collectors purchase them is to acquire the Roosevelt dime and Kennedy half dollar — the set is the only way to get them in 90 percent silver. The silver quarter-dollars can be purchased separately in the 2010 Quarters Silver Proof Set. […]