The United States Mint on Wednesday, July 27, released the Gettysburg Quarter Three-Coin Set for a price of $14.95.

The three-coin set is the sixth released in the America the Beautiful Quarters® product series and the first 2011-dated issue. The three quarters within the set share a reverse design that honors Gettysburg National Military Park which is located in the state of Pennsylvania.

The Gettysburg Quarter Three-Coin Set is produced for coin collectors as it contains numismatic quarters including:

The quarter was released into circulation on January 24 and ceremoniously introduced one day later at the park’s Visitor Center with local students and other observers in attendance. It was made available for order by the United States Mint in bags and rolls three days later. 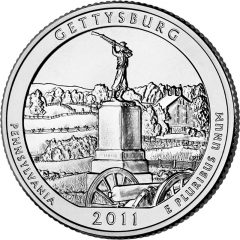 The coin’s reverse depicts a view of the 72nd Pennsylvania Infantry Monument, which is located on the battle line of the Union Army at Cemetery Ridge. Inscriptions are GETTYSBURG, PENNSYLVANIA, 2011 and E PLURIBUS UNUM. It was designed by Joel Iskowitz and sculpted by Phebe Hemphill.

Each three-coin set may be ordered from the United States Mint website (www.usmint.gov/catalog), or its toll free number 1-800-USA-MINT (872-6468).

The Gettysburg coin is one of at least 56 that will be issued through 2021 that honor American national parks and other sites throughout the U.S. and its territories.

The Battle of Gettysburg was one of the crucial battles of the Civil War, as it was the turning point with the North, under Union Major General George Gordon Meade, defeating the South, under General Robert E. Lee. The battle was fought during the first three days of July 1863. It resulted in the largest number of casualties of any other battle during the time. The area was designated as a National Military Park in 1895.

The United States Mint has also produced five-ounce, .999 fine silver coins featuring the same designs as those on the quarter. The Gettysburg National Military Park Silver Bullion Coin was sold to the Mint’s network of Authorized Purchasers in April. All 126,700 sold out. The collector version, the Gettysburg National Military Park Silver Uncirculated Coin, is expected out later this year.

PT Barnum would be thrilled.