No stranger to American coinage, Delaware Congressman Mike Castle participated in another unveiling ceremony late last month of the 2010 America the Beautiful Quarters, this one hosted at Bombay Hook National Wildlife Refuge in his home-state. 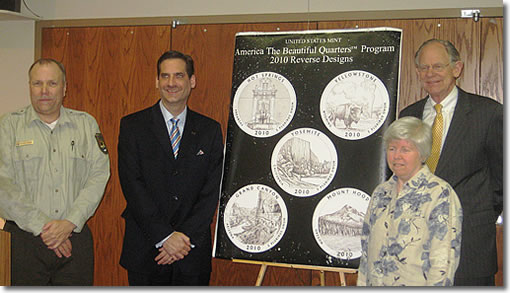 The representative from Delaware was joined at the second ceremony by U.S. Mint Philadelphia Plant Manager Marc Landry, Bombay Hook National Wildlife Refuge Manager Michael Stroeh and Friends of Bombay Hook President Janet Manchester. The group praised the new series of quarter-dollars and the benefits that it can provide.

"I am hopeful that this series, which will feature depictions of national parks and historic sites throughout the 50 states, will be as successful as the 50 State Quarters Program and incite an interest in our nation’s history, increase tourism to our national parks, and serve as an educational tool in our classrooms.

Additionally, at a time when Congress needs to practice spending restraint, it is promising to have a program that actually brings in revenues, which this program has the potential to do, just as the 50 State Quarters Program."

Castle not only authored the America’s Beautiful National Parks Quarter Dollar Coin Act of 2008, which authorized these new strikes, but he was also responsible for the highly successful 50 State Quarters Program that ran from 1999 through 2008. And just like that program and its follow-up, the 2009 District of Columbia and US Territories Quarters Program, the new series will feature one coin from each state, the District of Columbia and the five territories of the United States, for a total of 56 coins.

As Congressman Castle alluded to in his statement, the 50 State Quarter program was actually a money making venture for the federal government. It generated an estimated $8.6 billion in revenue with $6.3 billion of that considered seigniorage. Seigniorage is the difference between what it costs the U.S. Mint to make each quarter subtracted from the 25 cents that the government charges the Federal Reserve to buy. Also, as millions of collectors pulled quarters from circulation, the Mint had to produce even more coins to meet transactional daily demand.

The authorizing act does require one major difference from the previous programs, however. The reverse (or tails side) design on these coins must be of national interest in content. As such, only locations such as National Parks, National Forests, National Wildlife Refuges, etc. can be shown. Some strikes will, however, be similar to the previous State Quarter series as several utilized the same locations that are to be featured on the new America the Beautiful Quarters — South Dakota’s Mount Rushmore is an example. Still, the program’s focus on the beauty of the American nation will be paramount.

"The United States Mint is proud to begin another spectacular journey, helping to connect citizens, students and collectors with some of the most magnificent and celebrated national parks and sites in our nation," stated Mint Philadelphia Plant Manager Marc Landry.

"The employees at the United States Mint at Philadelphia and at Mint facilities across America look forward to creating the quarters of the America the Beautiful Quarter Program.”

When it appears in 2015, the quarter dollar featuring Bombay Hook National Wildlife Refuge will mark the twenty-ninth strike in the program. But the long wait until that coin debuts does not prevent officials from the refuge from being excited now about its inclusion. 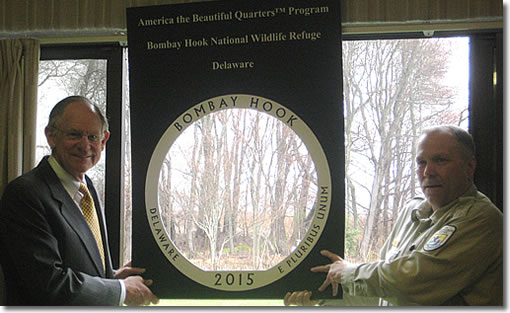 "The Bombay Hook National Wildlife Refuge design will be the 29th to be featured and will be issued in 2015. We hope that inclusion of the refuge in the Program will encourage Americans to not only travel to Delaware where they can enjoy this refuge, but also the other great wildlands across this country."

The five 2010 quarter dollars unveiled at the ceremony honor the following locations:

These .999 fine silver bullion coins have a diameter of three inches, weigh five ounces and bear the same reverse designs as the quarters. Their edges, however, will not be reeded like the quarters but instead flat and angled with their fineness and weight incused. That has been a production challenge, according to the Mint.

"Edge lettering is risky on a ten ounce coin [with a three inch diameter] — you put it on a five ounce coin, you get crumpling and cracking," U.S. Mint Director Ed Moy recently described.

"We had to figure out ways to do it. The best way that we’re doing it now, and the test strikes that have shown us promise is, it’s fainter… not really deep, and it’s done on an angle so you have actually more metal for the stamping to hit, versus vertically. "

The Mint’s America the Beautiful Silver Bullion Coins Program is structured much like the quarters’ program, although releases will be different this year. Current plans are to issue the first 2010 silver coin in late summer, with the following four 2010 silver coins launched at staggered intervals through the rest of the year. Beginning in 2011, it is expected that each coin will launch during the same time as its corresponding quarter.

The Mint will not sell these directly to the public, but instead make them available to a small network of authorized purchasers who in turn will resell them (just as other Mint bullion coins like the American Silver Eagles). Director Moy has discussed the possibility of numismatic versions at some point. If they come to fruition, the Mint would offer them directly, just like its other collectible coins.