The United States Mint at noon ET today unveiled the final designs for the 2010 America the Beautiful Quarters in a ceremony held at the Newseum in Washington, D.C.

Speakers at the ceremony included U.S. Mint Director Ed Moy, Congressman Mike Castle, one of the lead co-sponsors of the legislation; United States Treasurer Rosie Rios; Harris Sherman, Under Secretary of Agriculture for Natural Resources and the Environment; and Secretary of the Interior Ken Salazar.

"Through America the Beautiful Quarters coins, we will be transported to national parks, forests and wildlife refuges, part of a vast public land legacy belonging to all Americans-natural and cultural treasures protected for our recreation, relaxation, education, inspiration and transformation," U.S. Mint Director Moy said at the Newseum.

The public until today had only seen proposals, which included 19 quarter candidate images of the four National Parks and one National Site to be honored this year.

The series of coins are the first in the America the Beautiful Quarters Program which will celebrate 56 sites in each state, DC and U.S. Territory with 5 different reverse designs per year until at least 2021. (See a dynamic quarters site map for all the locations and information on each.)

The Mint consults with each site’s representatives and normally creates 3-5 candidate designs for each coin. The line art designs go through a series of reviews by at least the United States Commission of Fine Arts (CFA) and the Citizens Coinage Advisory Committee (CCAC) who offer their recommendations. These bodies in September reviewed three designs for Yellowstone, and four each for Hot Spring, Yosemite, Grand Canyon and Mt. Hood.

Toward the end of the design process, the U.S. Mint Director provides his recommendations to the Treasury Secretary, who is charged with making the final selection for each coin.

"This program holds real value in helping Americans of all ages learn more about U.S. history, landmarks and culture through highlighting 56 national parks and sites throughout our country and territories in a series of quarters that will live on for generations," said Treasurer of the United States Rosie Rios today at the Newseum.

The following line art images provide a closer look at each of the designs that will be seen on this year’s quarter-dollars. Click on any image to enlarge it. 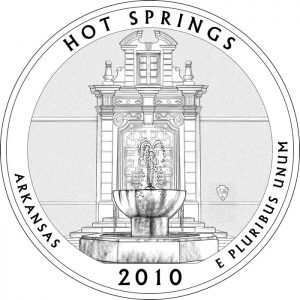 The design depicts the Hot Springs National Park headquarters building in the background. It was built in the Spanish colonial revival style and completed in 1936. The National Park Service emblem is featured to the right of the door. The site’s fountain is featured in the foreground. Inscriptions include HOT SPRINGS, ARKANSAS, 2010 and E PLURIBUS UNUM.

Of the four proposed designs, this is the one the CFA recommended. The CCAC preferred a design featuring the fountain without the headquarters building in the background.

Hot Springs remained a reservation area until 1921, when Congress officially renamed it Hot Springs National Park. It eventually came to encompass over 5,000 acres including the surrounding hillsides. Baths are still offered by local businesses which utilize the hot springs water that they purchase from the Park. 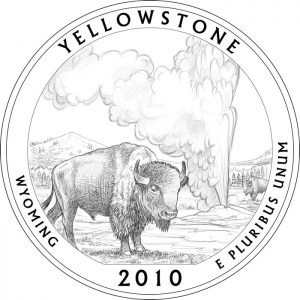 The design features Old Faithful with a bison in the foreground. Inscriptions include YELLOWSTONE, WYOMING, 2010 and E PLURIBUS UNUM.

The reverse design was one of three proposed and the one preferred by the CCAC. The CFA rejected all of the proposals.

The quarter is scheduled for release in June 2010.

Today, it is estimated that over 3 million people visit Yellowstone National Park each year, many of them utilizing the in-park hotels and cabins. The area is abundant with wildlife and picturesque scenery, but it is most noted for being riddled with geothermal features. Most famous of these is the Old Faithful Geyser which erupts regularly. 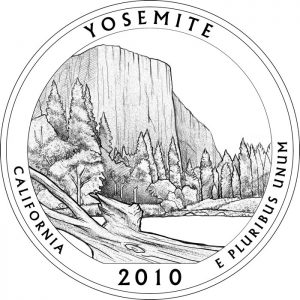 The design depicts El Capitan, which is 3,000 feet at the tallest point and is the largest monolith of granite in the world. Inscriptions include YOSEMITE, CALIFORNIA, 2010 and E PLURIBUS UNUM.

The CCAC recommended this design out of three others. The CFA preferred another that depicted the Half Dome rock formation.

The quarter is scheduled for release in July 2010.

An estimated 3.5 million annual visitors enjoy the benefits the Yosemite National Park has to offer. Most only spend time in Yosemite Valley enjoying the granite El Capitan and the more famous Half Dome. However, the park features much more scenery, with over 95% of it designated wilderness. Wildlife runs abundant and Yosemite is also home to groves of ancient giant sequoias. 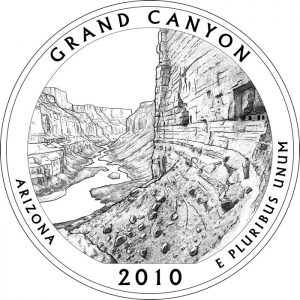 The design depicts a view of the granaries above the Nankoweap Delta in Marble Canyon near the Colorado River. Inscriptions include GRAND CANYON, ARIZONA, 2010 and E PLURIBUS UNUM.

The CFA and CCAC both recommended this design over three others. The CFA suggested several modifications, however.

The quarter is scheduled for release in September 2010.

Almost 5 million people visit the Grand Canyon National Park each year. The summer is prime tourist time with temperatures on the rim usually quite comfortable. Rains are a common occurrence during this season along with strong thunderstorms. The South Rim remains open year round, but the North Rim is usually closed late October to mid May due to heavy snows. 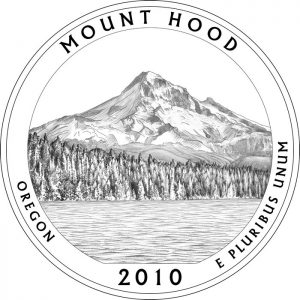 This reverse design portrays a view of Mount Hood with Lost Lake in the foreground. Inscriptions include MOUNT HOOD, OREGON, 2010 and E PLURIBUS UNUM.

The CFA and CCAC both preferred this design over three others.

The quarter is scheduled for release in November 2010.

Mount Hood received its name in 1792 when Lt. William Broughton named the peak after Lord Samuel Hood, a respected admiral of the British Royal Navy. Over 25% of the forest lands are designated wilderness, meaning a concerted effort is maintained to restrain human influences on the area. Almost 4 million visitors enjoy Mt. Hood each year.

Created by Congress in 1792, the United States Mint (http://usmint.gov/)is the Nation’s sole manufacturer of legal tender coinage.  Its primary mission is to produce an adequate volume of circulating coinage for the Nation to conduct its trade and commerce.  The United States Mint also produces proof, uncirculated and commemorative coins; Congressional Gold Medals; and gold, silver and platinum precious metal coins.

I like that they have the consistent border with an engraving filling the inside. The 50 state quarters were such a mixed-up jumble of inconsistent mostly clip-art-ish designs.

I have been a coin collector for a while now and I really enjoyed collecting the 50 state quarters and the 6 territories. I think 2010 will be an adventure trying to hunt down these 2010 quarters. It will be exciting and fun. The new quarters were a good idea to show the true natural beauty of the U.S.A.