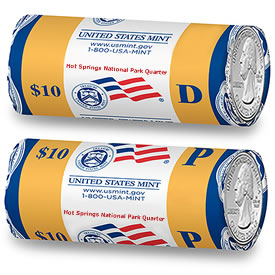 Rolls and bags of the first 2010 America the Beautiful Quarter will be released on April 19, 2010, the United States Mint said this week. If tradition holds, this will also be the day the coins are officially released into circulation.

The first of the 56 quarters in the new 11-year program will honor a park in Arkansas and is named the Hot Springs National Park Quarter. The April 19 date is in line with expectations, as US Mint Director Moy discussed "the third week of April" during a recent coin forum.

The Mint has also decided on what it will charge for two-roll sets and 100-coin bags of the new quarters. The $32.95 price for the rolls is the same as what the Mint charged last years. The 100-coin bags, however, will be more expensive with a $3 price increase at $35.95.

The Mint has said these prices will be used for all 2010 quarter rolls and bags, which will be available later in the year when each of the remaining 2010 America the Beautiful Quarters are released. These will include the:

The Two-Roll Quarter Sets are issued following each release. The set includes 80 circulation strike quarter-dollars, with one roll containing 40 coins with the Philadelphia "P" mint mark and the other roll with the Denver "D" mint mark.

100-Coin Quarter Bags (P) contain circulation strikes of the quarters minted in Philadelphia. At a $35.95 price, the premiums for each bag is $10.95.

The Mint has been busy of late with new pricing, having just announced the product prices for the annual sets it will release this year.