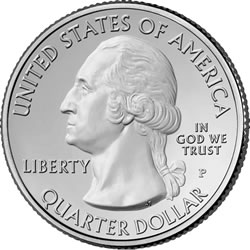 Next year’s America the Beautiful Quarter design candidates have already been created and reviewed, although the final selections for this year’s reverse designs are yet to be announced.

The 2011 quarters will release into circulation like the United States Mint favors, versus the accelerated time-frame the public will witness for 2010 quarters

The legislation approving the new park and site quarters was only signed into law by President George W. Bush on December 23, 2008. (Read about the recent coin forum where US Mint Director Moy discusses quarters.)

As a result, before this year’s designs came to fruition, the US Mint had to first go through the process of actually creating the America the Beautiful Quarters Program, line up the 56 national park and other national sites to be honored, coordinate with the overseeing authority for each site, and get production and other Mint procedures ramped up — all in span of a few months.

2011 America the Beautiful Quarters will roll out next year at a schedule the Mint can better control — earlier, in equal intervals throughout the 12 months, and with about two months between each release. By comparison, the very first 2010 Hot Springs quarter is only expected to launch in the third week of April, with the four other quarter-dollars following in nearly consecutive monthly releases (June-November).

Part of the production process for the quarters is designing several candidates for each site, which then undergo outside review by several parties, to include the Commission of Fine Arts (CFA) and the Citizens Coinage Advisory Committee (CCAC). Both the CFA and CCAC have commented on the designs. The following provides the CCAC recommendations for the 2011 designs based from their review meeting on January 26, 2010:

"For the coin portraying Gettysburg National Military Park in Pennsylvania, several members supported design PA-01, which depicts the 72nd Pennsylvania Infantry Monument. However, several members did not support any of the images presented, and most members would have preferred design concepts related to the Battle of Gettysburg and its vital role in American history. The Committee voted 7-2 to encourage the United States Mint to consider soliciting additional designs, perhaps more symbolic in nature, to convey the importance of Gettysburg National Military Park to our Nation."

"For the coin portraying Glacier National Park in Montana, the committee unanimously preferred design MT-03, which portrays a mountain goat over the rocky slopes of the park’s high country. Members were enthusiastic about the combination of an iconic mountain goat with the grandeur of the mountains, and felt that this design would translate into a very appealing coin."

"For the coin portraying Olympic National Park in Washington, the Committee unanimously preferred design WA-01, which features a Roosevelt elk with a view of Mount Olympus in the background. Once again, the Committee found the combination of the park’s wildlife and scenery to be especially compelling."

"For the coin portraying Vicksburg National Military Park in Mississippi, the Committee strongly favored design MS-02, which carries an image of the U.S.S. Cairo on the Mississippi River as it would have appeared during the Civil War. Members felt that this design, in addition to the quality of its composition, has the virtue of showcasing the historical significance of the Navy in the Civil War."

"For the coin portraying Chickasaw National Recreation Area in Oklahoma, the committee preferred design OK-01, which features Buffalo Springs amid its stone spillway. Members generally appreciated the perspective and composition of this design, particularly the foreground foliage. However, some members were concerned that the human figure would be so small as to be indistinct on the small scale of a coin."

i am totally for the iron clad for vicksburg. it would make a narly design. the other choises for the quarters are ok too.