On the eve of the 2010 Lincoln cent launch ceremony in Springfield, Illinois, United States Mint Director Ed Moy met with about 60 coin enthusiasts at the Abraham Lincoln Presidential Library and Museum, where he answered questions and shared information about the US Mint and its coin programs. 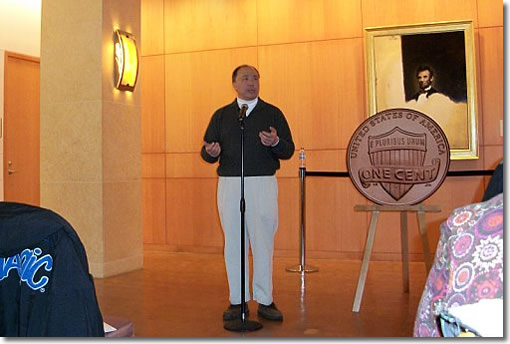 There is also an interesting response to CoinNews’ Rhonda Kay’s question regarding America the Beautiful Silver Bullion Coins. Moy describes some of the challenges in striking the five-ounce silver coins, a delay in getting them out the door, and whether they will ever be sold as a numismatic product.

The coin forum questions and answers are transcribed by CoinNews as closely as possible to the originals remarks.

Q: Will you be publicizing the release dates of the America the Beautiful Quarter? The actual releases… I realize they’re being made for many years, I’m not talking about five years, I’m just interested year by year, knowing ahead of time as opposed to three days ahead of time.

A: Let’s see. Let me give you a little bit of background, for those people who don’t know about our America the Beautiful Quarters program. First off, the vast majority of the coins that we make and the first time they tried to do rotating designs was the State Quarter program, that was very, very successful. As a matter of fact, we probably made three times as many quarters than we normally need for circulation, because so many were collecting them. The last several surveys that we did showed 147 million people were collecting those state quarters.

It was very, very successful, and when you have banks ordering basically 300% of what they normally order, and I’m making 14¢ on every quarter, we probably put about 5 or 6 billion dollars into taxpayers hands, via the quarter program. Congress said this was a very, very successful program and we want to continue it. So they continued it first by extending the State program to the District of Columbia and territories.

So in 2009, there are five territories and the District of Columbia, and then they passed a law saying we want to continue the State Quarter Program and do the America the Beautiful and we’ll honor a National Park or National Site in each state. [That’s] the reason why it’s been so difficult getting an order out is when you go by the order that they came into the union so it was very set, there was no disagreement that Wisconsin came in 1848 there’s no dispute about that plus when you deal with parks, you have to select the parks first.

And so every state had to pick what park or site we wanted to honor. And so with that you’ve got to figure out when that park really became a national park or site. Was it when it became a state park or was it when the federal government took control of it. So you had to work out all those issues. And those issues were finally worked out in late fall of last year. And so we recently put together a list of the five parks that we’ve come up with for every single year and put them on line. You should be able to get to our website to get that, because we would’ve listed all of that. And we also did the extended bookmarks, which we didn’t bring with us today, but if you give us your card, we’ll be able to send one to you.

Q: Have you set the actual dates?

A: No, but we have the sequence that they’re going in.

Q: Give me the dates, because some of us are going on vacation and maybe would want to schedule our vacation around the release date, I’m assuming they’re going to be released at the park.

A: Yes. And there’s a further factor. It normally takes us about 18 months from the passage of legislation to coins rolling off the press. And congress got this passed in January 2009, or somewhere in there, so they gave us 12 months to get this up and running, and it’s a complicated program, from what I’ve just described. And so everything got kind of squished.

The bottom line is the first one, which is Hot Springs, Arkansas, will likely be the third week in April. And you take a look at the four more quarters that come after that, and we’re squishing them over eight months. Once we determine those dates, we’re getting a little more hipper, so we’re starting a Facebook page that will focus exclusively on the America the Beautiful quarters program, so once we work out a date with the park of when to do it, instead of a press release, if you then become a Facebook friend then you’ll be getting instant notices from that.

I can’t give you a specific dates because we haven’t got specific dates worked out with all the parks yet because a lot of it is also working out with the park ranger, what is best for them. So we’ve got the early ones, you know, but we don’t have the second, three four and five. So I can’t give you dates that haven’t been set.

Q: This reminds me of when they came out with the Washington quarter in 1932, you had one other design by Laura Fraser…

A: Yes, it was gorgeous.

Q: Yes, the fine arts commission liked that quarter design but it seems that Andrew Mellon wanted the design by John Flanagan, he chose because it was the end of his career, and Mellon wanted to do something that was…

A: And there was a little bit of male chauvinism going on, and I don’t know what the real information was but the woman’s design was not chosen and I’ve seen the plasters of that and they’re absolutely gorgeous. One consciousness decision that I’ve made after having the ultra high relief gold coin created was I don’t want to continually to go back to the well for old designs. Now I want to put the past behind us so our artists can focus on new designs that reflect the 21st century feel on it.

CoinNews Question: I have a question about the America the Beautiful 5 oz silver coins. How will the Mint distribute those? Will it be ordered directly from you or do we have to go through one of your authorized buyers?

A: Right. The authorized, primarily as a bullion coin, although we can make them as a numismatic product. So right now the focus has been on making them. Because when you have… the law was very specific, they said it had to be a certain diameter and it had to be 5 ounces. Well, there isn’t a 5 ounce blank out there, so we had to get this custom made.

Then, because it was 3 inches in diameter, well we’ve got a 5 ounce piece of silver and we stretch it out to a 3 inch diameter, it’s paper thin. And then congress mandated that we had to edge letter it. So when you edge letter a paper thin coin, you get crumples. We went back to congress and said technically it isn’t possible, and they said we’ve got too many other things going on, you guys figure out how to do it. We’ve been technologically struggling to make this coin happen.

We’ve made some breakthroughs in it, where the edge lettering is not as deep or noticeable. But it now doesn’t mess up the rest of the coin now. That addresses the difficulty that we’re having with the coin. So, we’re having that difficulty, we’re just shooting to meet the legislative mandate making it a bullion coin for now. Really a bullion coin is bought by authorized purchasers. That’s the only way you can get them. And when we work out the kinks, we’ll consider making them a numismatic product out of them.

This ends the first article installment covering the questions and answers from the February 10, 2010 US Mint coin forum. Stay tuned this week for additional segments.

Just did a quick run of the numbers – someone may want to check my math. Looks like, as mandated, the 5 oz bullion coin would have a thickness of about 3.25 mm (assuming we’re talking troy ounces). Congress needs more math majors!

Anyone who is able to attend the release event will have the opportunity to be one of the firsts to obtain the newly released Yosemite National Park Quarter! There will be a coin exchange where visitors can pick up the newly released Yosemite National Quarter at face value. There is a one roll minimum and ten roll maximum. Be the first of your friends to have this historic, collectible quarter. The event is Thursday, July 29th at Yosemite National Park at 11:00 am (PT). The general public is invited to gather at the Yosemite Valley Visitor’s Center where the launch… Read more »

[…] U.S. Mint Director Ed Moy described earlier in the year, part of the delay has been in developing a process to inscribe the fineness […]