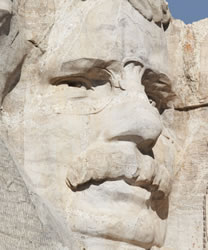 While catching up on the weekend’s reading I came across an article Debate rages in coin world: Theodore Roosevelt or George Washington on new quarter? The article is about how the Citizens Coinage Advisory Committee debated whether to recommend that Teddy Roosevelt be placed on the obverse of the new America the Beautiful Quarters.

Introduced in 1932, the Washington Quarter was intended to be issued as a one-time circulating commemorative to honor the 200th anniversary of George Washington’s birth. The quarter was born of controversy when Secretary of the Treasury Andrew Mellon chose John Flanagan’s depictions over what had been determined to be a more artistic version by Laura Gardin Fraser. Although Mellon was a collector of great fine art that was later donated to the National Gallery of Art, many knew he was a sexist and refused to consider that a woman’s work was better than a man’s.

As the Great Depression deepened, no quarters were struck in 1933. Toward the end of the year, US Mint director Nellie Tayloe Ross was asked by the Federal Reserve to produce more quarters for circulation. Rather than use a new design, Ross ask the Treasury Secretary William Woodin for permission to continue to use Fraser’s design. Since Ross and Woodin did not want to undergo a new design competition, the Fraser designed continued until it was "updated" in 1999 for the 50 State Quarters Program.

Numismatist see Teddy Roosevelt as the father of the coinage renaissance when he tried to conspire with Augustus Saint-Gaudens to bring classic design to American coinage. Roosevelt call this his Pet Crime. Roosevelt was instrumental in the Mint using Saint-Gauden’s designs for the $10 gold eagle and his famous design on the $20 gold double eagle coin that continues to be celebrated today. Add the wonderful work by Bela Lyon Pratt on the gold quarter and half eagle coins along with Victor David Brenner’s Lincoln cent and the stage was set for a period of timeless classics.

Under his presidency, Roosevelt made conservation a national priority. He placed more land into the public trust than any other president and created the US Forest Serive to care for that land. Roosevelt elevated the importance of the National Park Service to be more than a caretaker of public land but make it accessible to everyone while protecting its beauty. His service to conservation has not been matched by any president since.

With his work on coinage and the lands that will be featured on the new series, it would be a natural recommendation to have Roosevelt adorn the obverse of these quarter. However, the article reports that the CCAC backed down because of the alleged lack of support by congress.

I am sure that members of the CCAC will ask that if there is no support for the design then why propose it? Because at some point, it is more important to do the right thing than taking the politically expedient path. It would put congress on record as being against a populist idea, albeit a small population of populists. It would show that the CCAC was an organization that understand the issues of coin design and not a rubber stamp body of sometimes bland coin designs.

The CCAC must re-evaluate their role as and advisory committee and advise. If this is not possible, then the CCAC only duplicates the role of the Commission of Fine Arts and should be disbanded.

I have decided not to bother collecting this new series of quarters, not even to set aside examples for a Whitman board. I’m a bit worn out after all these state and territorial quarters. Quite honestly, the only thing which could possibly change my mind would be to replace Washington’s portrait with that of Theodore Roosevelt’s. I don’t understand Congressional opposition to this considering Washington is on the one dollar bill as well as the fact that there are over forty years worth of quarters adorned with his portrait in current circulation that won’t be going anywhere soon. I suppose… Read more »

As a member of the CCAC, I read Scott Barman’s article, “America the Beautiful Quarters, CCAC dropped the ball again” with great interest. According to Berman, his opinion about the CCAC’s actions concerning the call to put Theodore Roosevelt on the obverse of “America the Beautiful Quarters” stems soley from his reading of an article entitled, “Debate rages in coin world: Theodore Roosevelt or George Washington on new quarter?”, published on January 20th. Although he might have read the January 20th article, I was left to ponder if he might have misread or inadvertantly skipped over a part of it.… Read more »

I read the article correctly, Mr. Marks. I read the statement you emphasized and drew my conclusion from the statement and the information in the article. Mr. Marks then said, “The statement seems to suggest that Berman [sic] is unaware that the committee actually proposed it. But once we proposed it, it fell flat.” How would I know that that the CCAC proposed this? Where was the reporting? Better yet, with the various directives from the President on the executive branch toward open government, then why aren’t the CCAC’s documents available on the web? What is on the web is… Read more »

Mr. Berman wants to know how he would have known about the CCAC’s recommendation to put Roosevelt on the quarter obverse. Actually I known that it received prominent coverage in Coin World. He also asks why the CCAC’s documents are not on the web. Well, actually they are. Please go to ccac.gov and you will find them — right out there for the public to see. In fact, if you go to the January 27, 2009 CCAC meeting minutes you will find the following excerpt concerning the Roosevelt recommendation: “9. Reverend Meier mentioned to the committee that he, as a… Read more »

With all due respect to Gary Marks, I tried to subtly point out that you are spelling my name wrong by including “[sic]” in the quotes from his response to indicate that the previous word is not a transcription error. Mr. Marks responds to my comment by continuing the same mistake in the spelling of my name. Respecting the name of the person you are conversing with is important to having disparate points of view discussed in a respectful manner. Therefore, if Mr. Marks would like to continue this discussion, I would appreciate that he spells my name properly! Mr.… Read more »

It was a great suggestion to go with Teddy and I’m disappointed it wasn’t picked up, especially by congressmen from New York representing his home area. It’s a missed opportunity, but glad the CCAC at least pitched it. I suppose it goes beyond the committee’s scope to share these recommendations to select members of congress to lobby them to sponsor a bill to enact these suggestions(?) Now, about the spaghetti hair: is anyone aware of links to already published articles about the story behind those changes in the 90’s? That and the lower relief and other design changes to the… Read more »

I extend to Mr. Barman my sincere apology for misspelling his name. I understand his indignation for my repeated error. I want to assure him that it was not deliberate.

Although it seems clear that Mr. Barman remains a critic of the CCAC, I hope that my clarifications and corrections concerning the issues surrounding the CCAC and the CCAC’s recommendation to place Theodore Roosevelt on the quarter have helped to inform the collecting community. I have always appreciated a healthy and informative debate and I salute Mr. Barman for his spirited exchange with me.

RE: billymac11’s comment: I too have wondered about why the quality of our coins has declined so precipitously over the years. The relief changes that began in 1988 are the most noticeable, esp. on the half-dollar. I don’t get why the quality that existed in the early ’70s has not been replicated over the years. Has it been the lack of a chief engraver? It would seem to be a minor detail to add some concavity to the design. Relief itself is not so much the problem as the perception of it. This appears to be a world-wide phenomenon based… Read more »

Vachon, I agree with you about the eye appeal. I have assumed that the lower relief redesigns have to do with production issues, such as making dies last longer or possibly speed or striking pressure requirements.

I’m hoping one of the more technically informed members here will pick up this thread and share their knowledge or opinions on the lower relief and the tweaking of the existing designs that’s been done over the past twenty years. Would love to see a new article or be directed to an existing article that covers this issue.

It appears to have been primarily a cost-saving strategy which, while I can understand in terms of cent and nickel production, I can’t understand it when it comes to the higher value coins given their high levels of seignorage.

Frankly, if the CCAC and the US Mint was truly interested in selling non-bullion US coins collectors they would strike fewer than 500 million of each coin. In 2009 the 2 major US Mints struck over 500M territorial quarters. Using the mint’s own statistics, it costs the Mint less than 3 cents to manufacture and distribute each quarter. The face value of these coins exceeds $125M, yielding a net profit to the US Treasury of $110M. Few companies have a 90% profit margin. I cannot think of a single company with a 90% profit margin that is a constitutional monopoly.… Read more »