The United States Mint today announced the design themes for the next 56 US quarters and the massive commemorative silver bullion coins that will be issued between 2010 to 2021.

It also formerly introduced the name of the new series, calling it the United States Mint America the Beautiful Quarters™ Program. (Coin collectors will note the name excludes the words "parks" or "sites," as the upcoming series had most often been described till today.)

"These new quarters will honor some of our most revered, treasured and beautiful national sites — majestic and historic places located throughout the United States and its territories that truly make us ‘America the Beautiful,’" said US Mint Director Ed Moy.

During the next 11 years and at a rate of 5 per year, the reverse or tails side of each quarter will feature a design emblematic of a national park or site in each state, the District of Columbia and U.S. territories.

The five America the Beautiful Quarters for release in 2010 will honor the following national sites:

Yellowstone is America’s first national park having been established in 1872. However, it will be featured second in somewhat of a surprise. Hot Springs National Park earns the honor of having received a reserve designation in 1832 — it became a national park in 1922.

Secretary of the Treasury Timothy F. Geithner approved the site list recommended by the US Mint on August 25, 2009

The obverse or heads side of each quarter will bear a restored version of the historic George Washington portrait which was first featured on the quarter-dollar in 1932. William Cousins modified that design slightly and his work has been seen on quarters since the 1999 launch of the 50 State Quarters® Program. The new portrait is to include, according to a US Mint statement, "subtle details and the beauty of the original model."

The US Mint has already added the quarter-dollars to its subscription service. Customers can pre-order rolls, bags and other products with the coins now, and they will be delivered when they are released by the Mint. 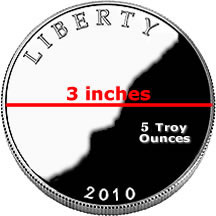 In addition to the new quarters, .999 fine silver bullion coins will be issued with designs that are "exact duplicates of the quarter dollars."

They will be especially unique, with their massive 3 inches in diameters. Each will weigh 5 ounces, with the fineness and weight edge-incused.

These will be amazing in size, as they will quite easily dwarf current US bullion coinage — as a comparison, the popular American Eagle silver coin is an already large 1.598 inches and includes a full ounce of silver.

The following release schedule provides a list for the quarters by year, location, name and the established national park or national site year.

Wow i thought it would the best to stop and a have a regular design, not 56 national parks quarter, how lame.

Im Rolando Rodriguez, from Coamo,Puerto Rico.Im a elementary school teacher. We have a coin collector club at the José Ramón Rodríguez School in Coamo, Puerto Rico since 2003. We enjoyed so much the USA Statehood and terrytories quarters program. My students and I visited the official ceremony presentation of the Puerto Rico 2009 Quarter. We have the opportunity to met the Director of the USA Mint, Mr. Edward Moy. And now we are proud of to receive our second quarter in 2012, at the new beautiful quarters program (El Yunque forest). Thanks a lot and congratulations for the excellent programs… Read more »

will i live long enouth to see an new regular quarter in circulation.

I have been collecting coins since I was ten years old .Recently I realized that a 1794 liberty cap large cent I have is a starred reverse variety.I have been waiting for a coin show to come to the philadelphia area so I can get it certified and then possible sell, it. I is according to how old coins are graded fine to extra fine condition. All the words and date and design are all legible. Im trying to get a real value on the coin and also noticed the price for this coin has gone up in the past,… Read more »

heard there’s things wrong with the newer quarters like wisconsin and the leaf. and heard about more copper in another and other things wrong. can”t find a site showing anything about these. do you know how i can find out. i have small jars of coins i want to go through, but don”t want to toss away any possible mismints. thanks