Honoring the 13 President of the United States, the U.S. Mint today releases the Millard Fillmore Presidential Silver Medal. This strike is composed of 1-ounce .999 fine silver and continues the Mint’s multi-year series dedicated to the former presidents.

After assuming the Presidency following the death of Zachary Taylor, Millard Fillmore served as the nation’s chief executive from July 10, 1850 until March 3, 1853. He, as a member of the Whig party, has the distinction of being the last President not affiliated with either the Democratic or Republican parties. As for the Whig’s, influential members of the party refused to support Fillmore for the Presidential nomination in 1852 leaving him with just the partial term as President.

Presidential Medals have a long history in the United States. Sitting President’s likenesses would be featured on bronze peace medals which were given as a sign of peace to Native American tribes, offered after signing peace treaties with other nations, and for other purposes.

These new Presidential silver medals bear the same designs as their earlier bronze counterparts and were introduced by the U.S. Mint beginning in 2018. To date, medals in the series have seen the following sales:

One honoring Franklin Pierce is scheduled to launch on Oct. 3.

Sculptor Salathiel Ellis designed the image of Millard Fillmore that appears on the obverse (heads side) of each new silver medal. Also included are inscriptions of "MILLARD FILLMORE," "PRESIDENT OF THE UNITED STATES, "1850," and the artist’s name "S.Ellis"

Artist Joseph Willson created the design found on the reverse (tails side) of the medal. The image shows a farmer, leaning on a plow while conversing with an Indian Chief. An American flag can be seen in the background.

Reverse inscriptions read "LABOR," "VIRTUE," and "HONOR" along with the artist acknowledgement of "J.WILLSON."

The Millard Fillmore Presidential Silver Medal my be purchased for $65 beginning at noon ET from the U.S. Mint via its online page dedicated to silver medals.

It has no mintage or product limits or an ending sales date.

I can’t wait until the George W. Bush silver medal comes out. \O/

Your unique posts are indeed always a ray of sunshine. Keep up the good work!

I suppose I ought to give up waiting for the Alfred E. Neuman Presidential Silver Medal now that he’s no longer competing for the nation’s highest office. 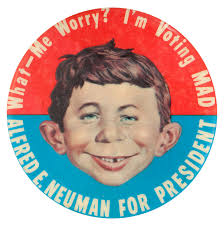 Someone, someone has got to mint this.

And I’ve got just the right “precious metal” for that; what else but Insanium?

What greatness we passed up on as a nation by not bringing his dream to fruition!

Now you’re definitely hearkening back to the Good Old Days, Paul, when we had Presidential candidates worthy of the name and the Office. Vote Adlai Stevenson!

When exactly did the Mint stop putting the standard Peace Pipe and Tomahawk Motif on the reverse of the Presidential Silver Medals?

Did this just happen. I am hit and miss with these but all the ones I have are the pipe and tomahawk.

The first time I saw a different design was on the Reverse of the Millard Fillmore Medal depiction above at the top of today’s feature column.

I didn’t catch this until you mentioned it here.

I was rather surprised to see it myself, Rooster, since I was under the obviously mistaken impression that the Reverse of all the Presidential Silver Medals was so to speak etched in stone.

By the way, I rather like that new Reverse, although I have no idea if this is a one shot deal or what’s next.

Kaiser, these medals look like silver replicas of the bronze presidential ones they made years ago. At least the coin boxes they come in are nice.

Wow, it would be difficult to choose from among those, Antonio, but if pressed I’d go for a close tie between state dance and state sport!

Since the (admittedly hackneyed old) definition for insanity aka madness is “doing the same thing over and over again and expecting different results”, there will be no end.

Speaking of insane, With his eagle eyes, Florida collector Clark Davis found 14 2022-P Wilma Mankiller quarter dollars in the American Women series exhibiting a progressive retained cud on the George Washington obverse. Clark is a Young Numismatist all of 10 years of age. A retained cud occurs when a portion of the die face adjacent to the rim breaks off but is held in position. A raised area of design features may appear in that area on the struck coin. A retained cud becomes a full cud if the broken portion of the die falls away, creating a larger… Read more »

Thanks for all that valuable info. I’m amazed that a ten year old could discover that but more power to him; hooray! We can never have enough of these young numismatic stars to keep our hobby going long after we have passed the torch.

Sure seems like there are a lot of quality control issues at the Mint lately. Or are these “retained cuds” more common than I realize?

Never heard of this minting phenomenon before, Jeff Legan; it sounds more like a problem cows in dire need of dental work might have.

Apparently it’s common according to the article I read, I think it was in Coin World magazine. It’s just they’re not getting caught and coins are entering circulation this way. Quality control isn’t what it used to be. Just pay me, I don’t care about doing my job.

Antonio, you just gave me some serious food for thought. I have to wonder if being required to press literally billions of coins a year and as such having to monitor the production of every single one of that mind-boggling number is just too much of a challenge for anyone.

That’s probably it. That explains it.

See, I knew it, Antonio, and I was sure I could count on you for proof!

And for uncirculated also, no doubt.