This medal is composed of 1 troy ounce of 99.9 percent fine silver with a total weight of 31.103 grams. The 1.598 inches medal offers a portrait of the ninth President of the United States on its obverse (heads side) with a wreath design and factual inscriptions on its reverse (tails side).

William Henry Harrison spent his life moving in and out of politics and military affairs. One of his most famous military encounters was the 1811 Battle of Tippecanoe against Tecumseh’s confederacy where he earned the nickname “Old Tippecanoe”. His name and associated fame would serve him well later in life as he won the U.S. Presidency in 1840 campaigning under the slogan of "Tippecanoe and Tyler, Too" with running mate John Tyler. His Presidency would be short-lived, however, as he became ill and died after only 31 days in office making him the shortest serving President.

Each of them are struck on the same planchets used for American Silver Eagles. However, unlike the Silver Eagles which have a reeded edge, the medals have a plain edge. The medals have no mintmark and may be produced at different U.S. Mint facilities. They feature a matte finish which is similar in appearance to that of an uncirculated coin.

The obverse of each new medal offers a left-facing portrait of the ninth U.S. President circled by a pearled ring as created by former United States Mint Engraver George T. Morgan.

The portrait is flanked by the inscription of WILLIAM H. on the left and HARRISON on the right.

For the reverse design, we find a laurel wreath within a pearled ring with inscriptions of INAUGURATED PRESIDENT OF THE UNITED STATES MARCH 4, 1841. DIED APRIL 4, 1841.

The William Henry Harrison Silver Medals may be purchased directly from the U.S. Mint via its online store page dedicated to silver medals. Pricing is $65.

Each medal is encapsulated and ships in a display case with a Certificate of Authenticity.

I have the whole collection so far lol I would say, it’s never a loss, unless you sell for less than what you paid. This hobby was over priced when I started. Has there ever been something that wasnt overpriced from the Mint?

There is money to be made in just about everything. I don’t plan on selling my hobby away that’s why it doesn’t bother me what I pay for what I want and continue to collect. Whoever gets to sell it can let that price bother them, and my collection isn’t for sale lol I only have real numbers dancing in my head. 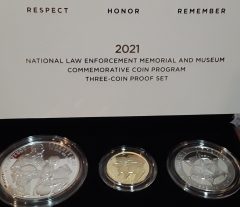 Yeah now that is ridiculously overpriced. Someone here mentioned them before the price increase and I got some that I liked. Even the smaller medals jumped to 20 bucks

Hurry Hurry get your Chucky Schumer coin Fugugly for sure!!!! lol Just needs some specs!!!

English, the language, she almost as bad for homophones as the French – where a mangling of “pantoufles en vair” into “pantoufles en verre” has condemned Cinderella to spend centuries in slippers made of glass … instead of fur.

Either way, why didn’t the slippers revert to base material along with every other Fairy Godmother-supplied upgrade? It’s what we writers call, “The Cinderella Syndrome,” — distract the reader sufficiently and one can get away with anything. Raider of the Lost Ark, as a cinematic example: Indy and the gang had absolutely no effect on how the story would ultimately finish. A bunch of dead Nazis (yay!) and warehoused ark. Still a great flic/fun yarn though.

Does this represent the moment before or after their passionate kiss?

This medal was engraved by Morgan to fill a hole in the series of Presidential medals which were mostly copies of the Indian Peace medals. Harrison didn’t live long enough to have an Indian Peace medal so Morgan engraved this much later.

In some cases yes, but the American peace medal series was a continuation of what happened under the British, with the portrait of George III on it. And they were not cheaply-made, the full facilities of the US Mint were used.

And those Native American Peace medals are very highly valued when they do come up for sale at auctions for sure.

Chucky Schumer coin grab them while you can!!! Time now for that nap, all you “Old Ladies”…..

I do plan on getting this since I have the other 8. Im not worried about them being over priced since im going to keep them for myself. I buy what I like. If it’s too high in price and I don’t need it ill pass on it. Like I just finished the complete commemorative half dollars and silver dollars with the national law enforcement coins. So im not planning on selling the set anytime soon. Im not spending a lot on the set to go and sell it and make Peanuts for what I paid for it.