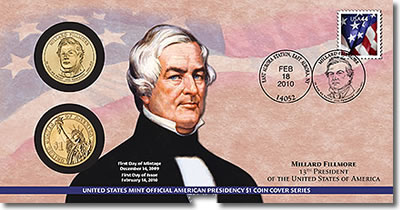 The limited-edition product is the first one released this year in the American Presidency $1 Coin Cover Series and the 13th since they began in 2007. Each is priced at $15.95, which is $1 more than past issues. A maximum of 32,000 will be produced, which is 8,000 less than older covers.

These covers include two Millard Fillmore Presidential dollars that were struck on the first day of minting and are mounted on a display card. One dollar is from the Mint’s Denver facility and the other is from Philadelphia. Both were produced on December 14, 2009.

In addition to the two $1 coins, the display card includes a 44-cent Flag postage stamp with a postmark of February 18, 2010, East Aurora, NY, which is when the very first dollars were released into circulation.

Don Everhart designed and sculpted the portrait of Millard Fillmore that is featured on the obverse or heads side of the coin. It also includes the inscriptions "MILLARD FILLMORE," "IN GOD WE TRUST," "13TH PRESIDENT" and "1850-1853,". 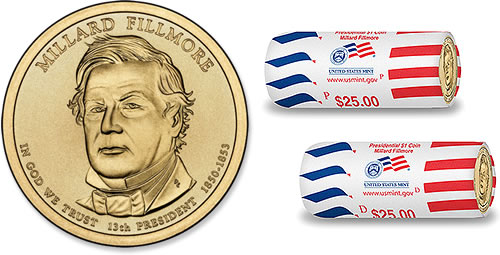 The Millard Fillmore $1 is the 13th coin released in the series honoring U.S. Presidents. It is the first for 2010 and follows the Zachary Taylor coin that launched on November 19, 2009. The next coin in the series features President Franklin Pierce. (See 2010 Presidential Dollar release dates.)

Orders may be placed through the 2010 President Millard Fillmore:

Rolls of the dollars are available directly from the Mint as well. They are available through specially Mint-wrapped $25 rolls containing either Denver or Philadelphia minted dollars for a price of $35.95, plus shipping and handling.