The United States Mint will send the Millard Fillmore Presidential $1 Coin into circulation on Feb. 18, 2010. On the same day the US Mint will ceremoniously unveil the new dollar at the Moravia Central School in Moravia, N.Y. at 10 AM ET. 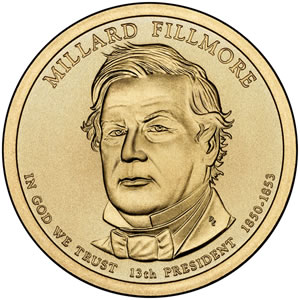 US Mint Deputy Director Andrew Brunhart will present the new dollar at the ceremony. Master of Ceremonies will be local history teacher John Haight. Sheila Tucker, Cayuga Count historian, is scheduled to speak.

Children 18 and under will receive a free Fillmore dollar while others may exchange dollar bills for the new coins. The Mint will also offer 25-coin rolls for $35.95 from either Philadelphia or Denver that may be ordered directly from its Web site (http://www.usmint.gov/.)

Don Everhart designed the portrait of Millard Fillmore that is featured on the obverse or heads side. It also includes the inscriptions “MILLARD FILLMORE,” “IN GOD WE TRUST,” “13TH PRESIDENT” and “1850-1853.”

For more information on the coin, to include specifications, see 2010 Fillmore Presidential $1 Coin. For other releases this year, see 2010 Presidential Dollar release dates.

Any idea if this is open to the public? Normally these ceremonies are but the article doesn’t state it.