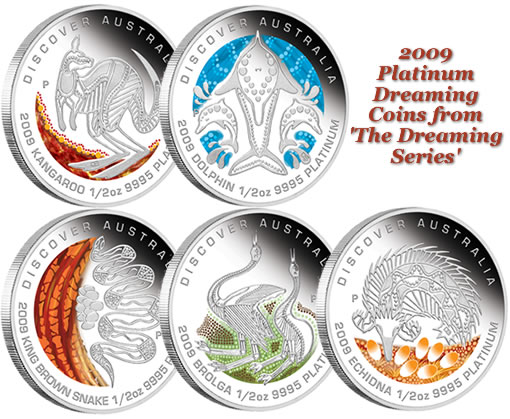 Called The Dreaming Series, it is the latest coin range to be issued under the Mint’s ‘Discover Australia’ brand banner. Promoting fascinating aspects of Australian wildlife, landscapes and culture, the coins are expected to become as popular at home and with international collectors, gift-buyers and investors, as the earlier releases in the program. 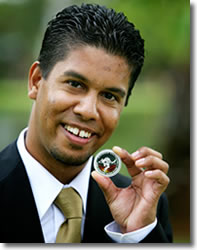 Inspired by traditional Aboriginal art, Darryl’s impressive work is contemporary and original. With 45 superb designs prepared for The Dreaming Series, he hopes to rouse greater appreciation of the beauty of Australian animals in their natural environment and raise awareness of the dangers that many now face.

Describing the new series as one of the most significant planned by The Perth Mint in 2009, Chief Executive Officer Ed Harbuz expressed confidence that the coins would generate tremendous interest around the world.

"Auction houses and galleries prove that Aboriginal art continues to be extremely popular," he said. "Darryl’s remarkable work can only extend the reach of its appeal by exposing it directly to large numbers of coin collectors worldwide."

Issued as official Australian legal tender, the coins are struck from 99.99% pure gold, 99.9% pure silver and 99.95% pure platinum in proof quality. Launched today, the 2009 coins portray three different interpretations of a kangaroo, dolphin, king brown snake, brolga and echidna. Another 15 designs are scheduled for release in both 2010 and 2011.

Each coin is offered in individual presentation packaging or as part of a five-coin year-set. Like all Perth Mint collectable releases, each coin’s rarity is guaranteed by a strictly limited mintage.

For collectors who would like to guarantee availability of all 45 Dreaming designs, the Mint is offering three-year subscriptions (while stocks last). Subscribers who act early will also receive Certificates of Authenticity with matching numbers and a stylish Display Box, a complementary piece of additional packaging.

Coins from The Dreaming Series retail from just $82.50 and are available from The Perth Mint on FREECALL 1800 098 817, at 310 Hay Street in East Perth, or online at www.perthmint.com.au or www.discoveraustralia.org.au.

Very nice coins. I’m rather partial to the echidna, myself.

How do they do the colors in the Australian Dreaming Series of coins designed by Darryl Bellotti? Very nice.