The Perth Mint of Australia launched a new proof set of silver coins depicting five classic motorbikes from around world. The set includes five, 1-oz legal tender coins made from 99.9% pure silver with each struck in proof quality. 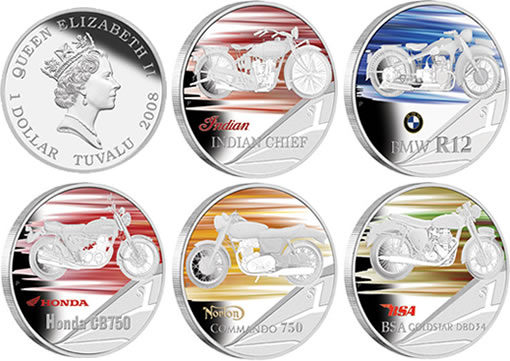 On the reverse of each coloured coin is one of these uniquely famous motorcycles, which appears to be racing past a background. Below is the motorcycle’s manufacture’s logo, and the coins $1 face value.

The obverse, or tails side of the coins, bears the Raphael Maklouf effigy of Her Majesty Queen Elizabeth II along with the inscriptions, ‘QUEEN ELIZABETH II’, ‘2008’, ‘1 DOLLAR’ and ‘TUVALU’, which denotes where the coin is issued as legal tender.