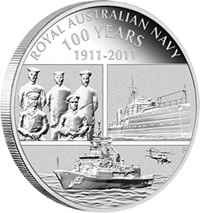 In 1 March 1901, two months after Federation, responsibility for the former colonies' naval forces passed from Britain's rule to the new Commonwealth Government.

This set in motion a sequence of developments which resulted in King George V granting the title 'Royal Australian Navy' to the Commonwealth Naval Forces on 10 July 1911 [...] 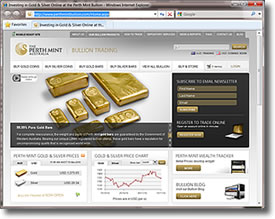 Buying gold and silver for investment from the internationally renowned Perth Mint is now just a few clicks away, thanks to the launch of www.perthmintbullion.com.

The new website offers investors a stunning choice of bullion coins and bars made by The Perth Mint from 99.99% pure gold and 99.9% pure silver. Purchasing is simple and convenient and is offered with the breakthrough of true live pricing [...]

Struck from 1oz of 99.9% pure silver and 1/10oz of 99.99% pure gold, each coin is issued as official Australian legal tender. Each release features a colour portrait of Blessed Mary and the inscriptions [...]

The Kangaroo Minted Gold Bars are available in a choice of seven sizes ranging from 5 grams to 10 ounces. When added to the legal tender coins struck each year as part of the nation's bullion coin program, which vary in size from 1/20 ounce to 10 kilograms, The Perth Mint now offers a 33-strong suite of 99.99% pure gold and 99.9% pure silver bullion products.

As part of the 2010 Sydney Coin, Banknote and Stamp Show, hosted by the Australasian Numismatic Dealers Association (ANDA), The Perth Mint will...
Read more
Australian Coinage and Numismatic News

As part of the 2010 Melbourne Coin, Banknote and Stamp Show, hosted by the Australasian Numismatic Dealers Association (ANDA), The Perth Mint will present...
Read more
Australian Coinage and Numismatic News

Bullion sales from The Perth Mint are on a golden run with the 'sell out' of the complete 30,000 mintage of its 1 oz...
Read more
Australian Coinage and Numismatic News

A limited collector coin replicating the design of the historical Sydney Cove Medallion has been unveiled at the Museum of Sydney by Lord Wedgwood of Barlaston, the seventh generation descendant of Josiah Wedgwood, whose company created the original Medallion in 1789.

Struck by The Perth Mint from 1oz of 99.9% pure silver and issued as official Australian legal tender, the coin features a special 'high relief' representation of the celebrated Medallion's allegorical design portraying 'time's opening scenes' in the colony of New South Wales.

With four classical figures on the shores of a bay, the scene was called Hope encouraging Art and Labour under the influence of Peace to pursue the employments necessary to give security and happiness to the infant colony. Beneath the figures in raised lettering was inscribed ETRURIA 1789, the name of Wedgwood's Staffordshire factory.

The Perth Mint has appointed Coins N Things Inc. (CNT) as the exclusive distributor for its Kangaroo Minted Gold Bars in North America. Based in...
Read more
Australian Coinage and Numismatic News

Gold Corporation, which trades as The Perth Mint, achieved a record profit before tax of $38 million and capitalised on the favourable market ...
Read more
123Page 1 of 3