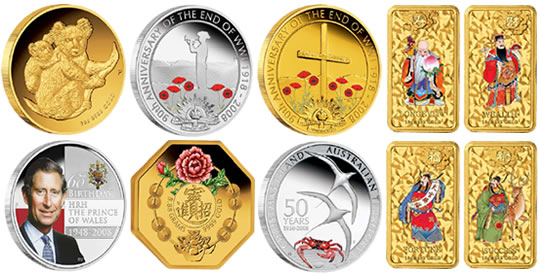 The series of coins will be available on The Perth Mint website for ordering soon, with release dates set for 10 July 2008. 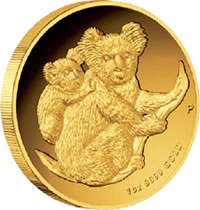 Available in three denominations, the Australian Gold Proof Koala is the first Perth Mint series to include a 1oz ‘high relief’ coin. The spectacular release is struck on a significantly thicker blank to accommodate the greater design depth on its specially prepared die.

A mother and baby koala sitting on a tree branch are depicted on the reverse of each coin. The design, which also incorporates The Perth Mint’s ‘P’ mintmark, is struck in ‘high relief’ on the 1oz coin.

Issued as legal tender under the Australian Currency Act 1965, proof quality Australian Koala gold coins are set to delight the most fastidious collectors into the future with appealing new designs each year. 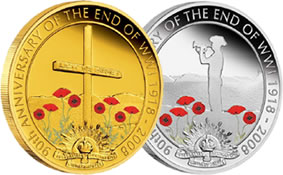 It is now 90 years since the guns of World War I fell silent. Among those robbed of their lives by the Great War were more than 60,000 soldiers from Australia. Many thousands more were injured, traumatised or taken prisoner.

On this significant anniversary, The Perth Mint honours all Australians who fought on the bloody battlefields of World War I with two outstanding numismatic tributes portraying sombre images of respect. Both designs incorporate red-coloured poppies – one of the most powerful symbols of remembrance for those lost in war.

Meticulously minted in proof quality from 1/4oz of 99.99% pure gold and 1oz of 99.9% pure silver, the coins are issued as legal tender under the Australian Currency Act 1965.

The gold coin’s reverse design depicts a burial cross inscribed with the words LEST WE FORGET among red coloured
poppies.

Both reverse designs, which incorporate The Perth Mint’s ‘P’ mintmark, are surrounded by the words 90th ANNIVERSARY OF THE END OF WORLD WAR I 1918-2008 and a representation of the 1904 Rising Sun badge featuring a scroll inscribed with the words AUSTRALIAN COMMONWEALTH MILITARY FORCES.

The obverse of both coins depicts the Ian Rank-Broadley effigy of Her Majesty Queen Elizabeth II, the 2008 year-date and the monetary denomination. 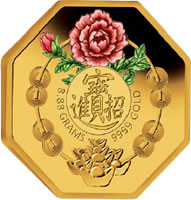 Chinese culture is steeped in lucky symbols. This stunning coin, which portrays several symbols of fortune and wealth, also reflects the auspiciousness of the number eight in traditional beliefs.

Struck by The Perth Mint from 8.88g of 99.99% pure gold in proof quality, the eight-sided coin is issued as legal tender under the authority of the Government of Tuvalu. Housed in attractive presentation packaging, the coin is limited to an extremely limited mintage of just 2,008.

The centre of the octagonal coin’s reverse design portrays a stylised combination of Chinese characters with the literal meaning ‘bringing money and treasures’. Other design elements portray:

In ancient times, the circular shape of such coins was said to represent Heaven, while their square hole symbolised Earth.

The Good Fortune gold coin’s obverse depicts the Raphael Maklouf effigy of Her Majesty Queen Elizabeth II and the monetary denomination of $28. 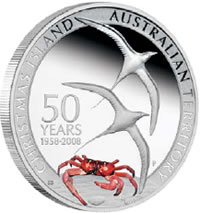 Fifty years on, this magnificent anniversary commemorative is being issued by The Perth Mint with a design celebrating the Island’s spectacular wildlife.

Located in the Indian Ocean approximately 2,650km north-west of Perth, Christmas Island was named by Captain William Mynors of the Royal Mary, who passed by on 25 December 1643. It became part of the British Empire in 1888 following the discovery of large quantities of phosphate of lime, an important resource.

Under Australian jurisdiction, more than 60% of the Island is now protected for the benefit of its many unique and unusual species and the preservation of their habitat.

Struck from 1oz of 99.9% pure silver in proof quality, the coin is issued as legal tender under the Australian Currency Act 1965. The Perth Mint will release no more than 5,000 coins.

The coin’s reverse design depicts the Golden Bosun bird, which is unique to Christmas Island, and a coloured representation of a large Red Crab. Millions of Red Crabs migrate annually from the rainforest on Christmas Island to the ocean in what is one of the wonders of the natural world.

As well as The Perth Mint’s ‘P’ mintmark, the reverse also includes the inscriptions CHRISTMAS ISLAND, AUSTRALIAN TERRITORY and 50 YEARS 1958-2008.

The coin’s obverse bears the Ian Rank-Broadley effigy of Her Majesty Queen Elizabeth II, the 2008 year-date and the monetary denomination. 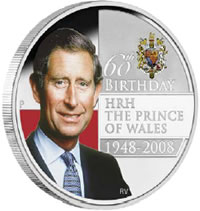 Once again, the Mint has employed spectacular coloured minting techniques to bring warmth and realism to the portrait of a member of the Royal Family on a proof coin struck from 1oz of 99.9% pure silver.

Sure to be acclaimed by the large number of Australian monarchists and collectors of royal memorabilia, it will be an essential acquisition for many who already own similar Perth Mint tributes to Her Majesty The Queen, Prince William and Prince Harry.

Issued as legal tender under the Australian Currency Act 1965, the coin is subject to a limited mintage of just 12,500.

The coin’s reverse depicts a coloured portrait of Prince Charles and a coloured representation of the official Prince of Wales
Coat of Arms. As well as The Perth Mint’s ‘P’ mintmark, the reverse includes the inscriptions 60th BIRTHDAY, HRH THE
PRINCE OF WALES and 1948-2008.

The coin’s obverse bears the Ian Rank-Broadley effigy of Her Majesty Queen Elizabeth II, the 2008 year-date and the monetary denomination.

Vivid characters hold centre stage in Chinese mythology, a vast anthology of ancient legends, folklore and traditional beliefs. Some of the most popular characters are revered as embodiments of fortune and prosperity. Symbolised in homes and businesses, these ‘lucky’ figures exercise a powerful influence in many people’s lives.

This stunningly original series of rectangular coins portrays four of the best-loved characters from Chinese mythology. Struck by The Perth Mint from 10g and 5g of 99.9% pure gold in specimen quality, each coin demonstrates the Mint’s exceptional coloured minting skills.

Issued as legal tender under the Australian Currency Act 1965, the coins are subject to strict limited mintages. The Perth Mint will release no more than 10,000 of each 10 gram design and no more than 20,000 of each 5g design worldwide.

The reverse of each rectangular gold coin depicts a coloured representation of a Chinese mythological character symbolising:

Each design incorporates the Perth Mint’s ‘P’ mintmark and the Chinese word for ‘fortune’, ‘success’, ‘longevity’ or ‘prosperity’ superimposed on clouds. The obverse of each coin depicts the Ian Rank-Broadley effigy of Her Majesty Queen Elizabeth II, the monetary denomination and the 2008 year-date.

My pick for Perth Mint Coins are 1 Ounce Gold High Relief Koala Coin. And also 2008 Gold Good Luck Fortune Coin too. I hope I can get Catalogue from Perth Mint very soon!