The Perth Mint on Monday issued its newest addition to the extremely popular Australian Koala silver coin series, the one ounce 2009 Koala Gilded Silver Coin. Making a stunning collectible, this year’s limited release portrays a new image of a koala that has been gilded in 24-carat gold. 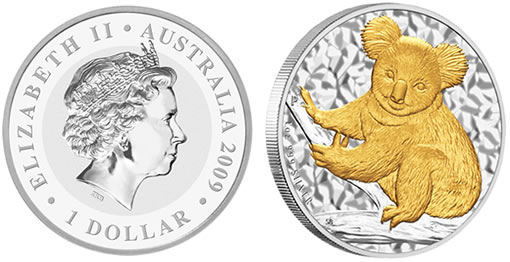 The gilded embellishment has been used just one other time on the Australian Koala coin, and is one of the most celebrated numismatic treatments by the Perth Mint. The gilding prominently portrays a young Koala as it sits on a tree branch.

Similar to the silver only 2009 Koala and Kookaburra coins, the latest edition has an obverse or heads design bearing Ian Rank-Broadley’s effigy of Her Majesty Queen Elizabeth II. Each is Australian legal tender, and includes an official "P" mint mark, denoting it was struck at The Perth Mint.

The following are Perth Mint provided technical specifications for the silver dollar: 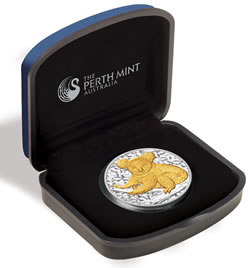 The Perth Mint has a limited mintage of 10,000 coins worldwide.

The coin is currently priced at:

The coins are also available through its many distributors.