A limited collector coin replicating the design of the historical Sydney Cove Medallion has been unveiled at the Museum of Sydney by Lord Wedgwood of Barlaston, the seventh generation descendant of Josiah Wedgwood, whose company created the original Medallion in 1789.

Struck by The Perth Mint from 1oz of 99.9% pure silver and issued as official Australian legal tender, the coin features a special ‘high relief’ representation of the celebrated Medallion’s allegorical design portraying ‘time’s opening scenes’ in the colony of New South Wales.

With four classical figures on the shores of a bay, the scene was called Hope encouraging Art and Labour under the influence of Peace to pursue the employments necessary to give security and happiness to the infant colony. Beneath the figures in raised lettering was inscribed ETRURIA 1789, the name of Wedgwood’s Staffordshire factory.

A small batch of around two dozen Medallions was created from samples of Sydney clay dispatched to England by Governor Arthur Phillip shortly after his arrival with the First Fleet in January 1788. Received in London by his influential friend Sir Joseph Banks, the clay was sent to Wedgwood, a visionary craftsman and industrialist otherwise known as the ‘Father of English Potters’.

On receipt of the finished Medallions back in Sydney, Governor Phillip expressed delight in a letter of thanks to Banks, proclaiming "Wedgwood has showed the world that our (New South) Welsh clay is capable of receiving an elegant impression."

Lord Wedgwood, who supports international sales and marketing of the worldrenowned brand created by his famous ancestor in 1759, said that the significance of the Medallion was reflected in the fact that over the years it had been re-issued for collectors several times and even replicated in wool and on stained glass.

"However, this is the first time that it has been seen on a legal tender coin," he said. "Meticulously-crafted with superb detailing, it is a tribute to the coining skills of The Perth Mint which shares with Wedgwood a passion for delivering excellence in design and manufacture."

Lord Wedgwood raised the intriguing possibility that with the Museum of Sydney occupying the site of the first Government House, he had launched the coin on the very spot that Governor Phillip had received and praised the original Sydney Cove Medallion.

In another fascinating historical connection, the coin is displayed next to one of the few known existing Medallions made in 1789, which now survive in museum collections with the Museum of Sydney, and the Mitchell Library, part of the State Library of New South Wales.

The coin, which bears the effigy of Her Majesty Queen Elizabeth II on the obverse, is available in an exclusive gift-boxed presentation set including a Wedgwood fine bone china plate and stand. Depicting the Medallion’s symbolic scene and lines from Erasmus Darwin’s contemporary poem The Visit of Hope to Sydney Cove, the 20.7cm plate’s blue and white design is edged in platinum. 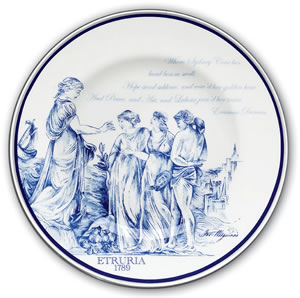 The Perth Mint will release no more than 5,000 of these superb collector pieces, each accompanied by a numbered Certificate of Authenticity.

The Sydney Cove Medallion Limited Edition 1oz Silver Proof Coin and Wedgwood Plate Set retails for $199, and is available from The Perth Mint on FREECALL 1800 098 817 or by visiting the Museum of Sydney Shop. Purchasers may also order online at www.perthmint.com.au or check availability with their local coin dealer.

CoinNews.net - September 30, 2022 3
The Royal Mint has today unveiled the official coin effigy of His Majesty King Charles III. The first coins to bear The King's portrait...