Bullion sales from The Perth Mint are on a golden run with the ‘sell out’ of the complete 30,000 mintage of its 1 oz Year of the Tiger gold bullion coin. 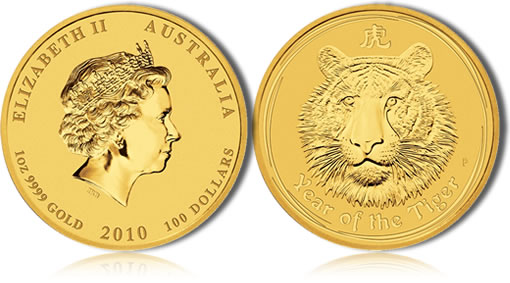 2010 Year of the Tiger Gold Bullion Coin – Click to Enlarge

The popular release is one of eight gold bullion coins released as part of the 2010 Australian Lunar Coin Series II. Offering buyers a choice of eight sizes from 1/20 oz to a huge 10 kilos, each gold coin portrays a striking design of a tiger’s head.

Interest in the annual Australian Lunar Series II has been very strong since it was launched in 2008. Both the 2008 1 oz Year of the Mouse and 2009 1 oz Year of the Ox gold bullion coins also sold their full 30,000 mintages.

"That’s a lot of gold!" said Sales and Marketing Director Ron Currie. "Like other mints, we benefitted from the dramatic pick up in gold bullion during the world financial crisis. Since then our objective has been to maintain sales at a much higher level than pre-WFC. We’ve had a close look at our production and international distribution strategy with the result that we’re now much better placed to satisfy demand."

The Perth Mint recently announced that it had taken a 100% interest in Australia’s only gold refinery, would be complementing its secure storage hub for bullion in the USA with a new facility in Europe, and had exciting plans for a new online distribution channel.

For a recent 22-karat coin release, check out the 2010 Gold Australian Sovereign.

CoinNews.net - September 23, 2022 3
After more than a half a century away from the public eye, one of the finest collections of U.S. gold coins and related patterns...