The pace of producing U.S. coins for circulation increased for a second straight month in February, manufacturing figures from the United States Mint show. The Mint also struck over a billion coins for the twelfth time in thirteen months.

U.S. Mint production facilities made just over 1.26 billion coins last month — spread across cents, nickels, dimes and quarters, marking increases of 0.8% from January and 8.3% from February of last year.

The U.S. Mint’s main mission is to manufacture coins, based on the nation’s demand, and transport them to Reserve Banks and their coin terminals for distribution into circulation.

The Federal Reserve orders more 1-cent coins from the U.S. Mint than any other denomination even as data shows that it costs 2.1 cents to make and distribute each one. The Mint struck 694 million Lincoln cents last month, representing 55.1% of the circulating-quality coins produced last month.

The U.S. Mint started selling rolls, bags and boxes of 2022 Native American dollars on Feb. 9. Rolls and bags of 2022 Kennedy halves are scheduled for release on May 5.

If the current production pace stretched through to December, the annual mintage for 2022 would top 15 billion coins. The U.S. Mint manufactured nearly 14.5 billion coins for circulation in 2021.

Lastly, in addition to the Native American dollar, the U.S. Mint through February released another coin with a one-year-only design and that is the first issue from their four-year program of American Women Quarters™. 2022 Maya Angelou quarters started circulating in January. (The Mint started selling collectible Maya Angelou quarters in rolls and bags on Feb. 7.) The circulating quarter figures above probably include all of them, as well as a portion of the program’s second coin, quarters featuring Dr. Ride Sally which launched into circulation in March.

That’s enough pennies to fill a large jar in a second. Hold on to those nickels that are worth more than a nickel.

Indubitably, Antonio. A nickel is worth 8 cents and a penny is worth 3 cents, based on today’s metal values.

It’s illegal to melt cents and nickels in the United States, so don’t get caught.

So true! Only mention it out of interest as a novelty.

You’re absolutely right. It’s not illegal to melt dimes, quarters or halves because their melt value is so much below their face value, at least for now.

Unless they are pre-1965 dated. All dimes, quarters, and half dollars were made for circulation with a 90% silver content up through the year 1964. Too bad rising silver prices in 1965 put the squeeze on the US Mint.

… and hiding in that couch 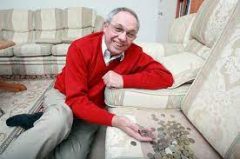