The pace of striking U.S. coins for circulation was quick in 2021 but down from 2020, production figures from the United States Mint show.

U.S. minting facilities shipped nearly 14.5 billion coins to Federal Reserve Banks for release into circulation in calendar year 2021, dipping 1.9% from the over 14.7 billion coins made in 2020 when production was ramped up to alleviate coin circulation issues brought on by the COVID-19 pandemic.

Mintages of Kennedy half-dollars and Native American dollars are lower than other coins because the Federal Reserve no longer orders them for circulation (or rarely does in the case of halves). Dollar coins (and usually half dollars) are produced only for U.S. Mint collectible sales.

Reported mintages for 2021 Kennedy half-dollars totaled 13.1 million with splits of 7.7 million from Denver and 5.4 million from Philadelphia. Marking an unusual year for halves, most of them were actually ordered by the Federal Reserve for circulation. As a comparison, 2020-dated half dollars ended at 3.4 million from Denver and 2.3 million from Philadelphia for a combined 5.7 million coins. Mint fiscal year data shows 12 million halves shipped to Federal Reserve Banks in 2021 against zero in 2020. (The Mint’s fiscal year begins on Oct. 1 and ends on Sept. 30. Outside of the 12 million halves just mentioned, all other data presented in this article is for calendar year 2021.)

The Federal Reserve orders more 1-cent coins from the U.S. Mint than any other denomination even as data shows that it costs 2.1 cents to make and distribute each one. The over 7.9 billion cents struck last year represents 54.6% of the combined production total for 2021. In 2020, the Mint manufactured nearly 7.6 billion cents for 51.4% of all coins minted for circulation.

This next table shows 2021 circulating coin mintages by production facility, denomination, and design.

The U.S. Mint’s program of America the Beautiful Quarters® ended in early 2021 with the final release — the 2021 Tuskegee Airmen quarter for Alabama. It ended with mintages of 304 million from Denver and 160.4 million from Philadelphia for a combined 464.4 million.

Fifty-six unique America the Beautiful quarter designs were released from 2010 to 2021.

The scarcest America the Beautiful quarter dollar by production facility is the Denver Mint-struck 2012-D Acadia National Park quarter at 21.6 million. The ‘P’ and ‘D’ Chaco Culture quarters follow with each at 22 million.

Aside from 2021, five unique America the Beautiful designs were issued in each year of the program. Combined ATB quarter mintages by year include:

Overall, the U.S. Mint struck over 18.5 billion America the Beautiful Quarters with each celebrating a different national park or national site in the United States or its territories. Here is a breakdown of production totals by quarter design and coin production facility:

Last year the U.S. Mint also issued the George Washington Crossing the Delaware quarter. It turned out to be, in essence, a transition quarter circulated after the last America the Beautiful Quarter and before the first 2022 American Women quarters.

Circulating mintages for the 2021 George Washington Crossing the Delaware quarter register high at 865.4 million from Denver and 838.4 million from Philadelphia for a combined 1,703,800,000.

Here’s how last month compares against others in the past year:

This last table shows productions totals by denomination for December:

This may explain my car wash experience.

Major D, the dearth of the 2021 George Washington Crossing the Delaware quarters in the Washington, DC area is a conundrum, especially in light of the very high circulating mintages of the coin. Compared to all of the 2010 – 2021 America the Beautiful Quarters mintages of 18,541,567,200, the 2021 George Washington Crossing the Delaware quarters mintage of 1,703,800,000 is approximately 9.2% of all the 21 years of ATB quarters minted. As I commented earlier, there seems to be some disparity in the distribution and circulation of these quarters around the country, regionally by state and county. For instance, in… Read more »

It has a high relative humidity and we call it a woodie.

Major D, maybe the conundrum is solved, as Chris T alluded to: the change (coins) is being stored in “coin jars” by the public. As illustrated in this infographic by the U.S. Mint titled “How Coins Circulate” circulating coins are initially produced at the U.S. Mints and ultimately end up in coin jars. 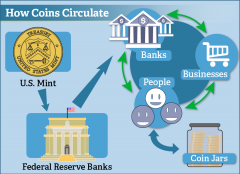 Sir Kaiser, this still seems to be the coin topic du jour, and the Mint web site is also highlighting it in a featured topic on “Explore how quarters enter circulation to reach your hands.” Here are some finer points: Coins circulate between banks, businesses, and people. When people keep coins to drop in change jars, piggy banks, or collections, they take the coins out of circulation. The U.S. Mint produces more than 10 billion circulating coins a year. New coins account for less than 20 percent of the total coins in circulation. The average lifespan of a coin is… Read more » 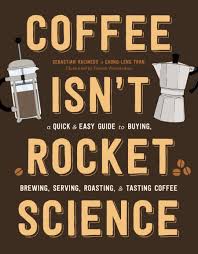