Demand is expected to be intense for this collectible which has a product limit of just 300,000 coins and an initial household order limit of three.

The newly-redesigned piece continues the U.S. Mint’s 35-year old program which, up until this point, had showcased the same coin designs since their debut. This includes Adolph A. Weinman’s Walking Liberty design which first appeared on obverses of 1916-1947 half dollars and John M. Mercanti’s heraldic eagle image that originated on reverses of 1986 American Silver Eagles.

A 2021-W Proof Silver Eagle bearing these original classic, "Type 1," designs launched in February. It sold out within minutes.

An initial release date of July 1st had been planned for the new coin but that was pushed back until today as part of a broader schedule shuffle. The date changes gave the Mint more time to implement website and policy enhancements to deal with BOT traffic issues which customers have experienced while ordering high-demand products.

Weinman’s full-length depiction of Liberty wrapped in a flag still graces the newest coin’s obverse. This image, however, was refreshed using technological advancements. The Mint notes that this design is "a closer reflection of Weinman’s original vision and includes the addition of his traditional artist mark." Other inscriptions are traditional and include "LIBERTY," "IN GOD WE TRUST" and "2021.

Created by Emily Damstra and sculpted by Michael Gaudioso, the redesigned reverse (tails side) offers the likeness of an eagle as it prepares to land. The eagle is carrying an oak branch as it might be doing to build a nest.

"UNITED STATES OF AMERICA," "E PLURIBUS UNUM," "1 OZ. FINE SILVER," and "ONE DOLLAR" are all inscribed on the reverse along with a "W" mintmark indicating that the coin is produced at the U.S. Mint’s facility in West Point.

When released at noon ET, the Type 2, 2021-W Proof American Silver Eagle may be ordered directly from the U.S. Mint via its online page dedicated to American Eagle coins. Pricing is $73 per coin.

Each proof Silver Eagle ships encapsulated within a black presentation box that is adorned with the United States Mint seal. An outer sleeve wraps the box, and it contains an image of the new reverse design. In addition, the coin is accompanied  by a U.S. Mint Certificate of Authenticity that bears an image of the obverse.

Kaiser – I’m starting to think there is this huge sign in the Mint’s customer service dept. that says “If you can’t dazzle them with brilliance, baffle them with ,,,,,,,,,”

Collectors don’t need more than one. It’s all driven by greed and avarice, by selfish people and dealers.

Sheesh. I too hope that is just a customer service person “thinking” on their feet in order get you off the phone. It is odd to think that because of an inability of their website to handle orders correctly, that their solution would be to stamp more coins and reduce their value. A cynic might think the mint would be happy to take an immediate cash grab at the expense of their customers.

Since this thread is still going strong now into the 2nd week, I have a question for the group. These coins take up a lot of space. Are you removing the coins and organizing in some way to compact volume, saving boxes somewhere else? Curious to see what others are doing for best practice.

FViia, I have a Liberty safe which I store my valuables in so I still have space. I do have certain items still in the shipping boxes (2011 ASE 25th Anniversary sets) and such but most I just organize and stack in their OGP.

Larry T: I also have that silver set unopened and in a safe. Thought about opening it because of how large the box is.

Rooster, If you ever decide to sell the 2011 set, you’ll get more for it. If someone does want to get them graded, they need to be in the original box to be labeled as the 25th Anniversary Set. I’m sure you are aware of this. By the way, congrats on getting that set in the first place!

Larry T: Yes sir. That is what is forcing me to keep it unopened and thanks.

Kaiser I have 8 sets in two shipping boxes and will never see a single set unless I get one of the boxes graded. Since some of the coins aren’t unique to the set, they must remain unopened to be graded 25th Anniversary Set coins. Another case where it sucks all because someone would try to rig the game!

Kaiser, Yes I don’t worry about anyone walking off with my safe. 800 plus lbs is even more than I can handle! The small safes would be fine for some things, but like you stated, one or two people could just disappear with it. In fact, if you’ve ever watched ‘Animal Kingdom’ Pope has my safe in his garage, although in a different color.

Kaiser, I certainly enjoy your sense of humor! I don’t think anyone would “walk off” with those items in it (and I sure wish they were) but a high end professional safe cracker would probably not have much of a problem. Fortunately I don’t think I’m on any of their radar screens! You say you have yours in shoe boxes. I hope they aren’t tennis shoe boxes, people pay big bucks for vintage tennis shoes. If I were a thief, that’s the first thing I’d be looking for!

A number of years ago, I bought a number of the Mint storage boxes for my proof sets. Unfortunately, I had to sell the proof sets about 10 years ago, but kept the boxes.

that’s what I’m using to store all my OGP items today.

Best practice? Don’t look to me for best practice. The only difference between a hoarder and myself, is I don’t have newspapers stacked up. 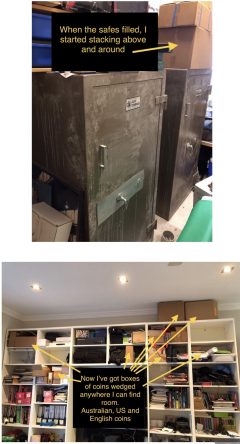 Rich: That number is adding up product 21EAN and 21EAN40. Do you know what 21EAN40 represent? Guessing it may be a 40 count tube. Thanks!

I’m surprised no one has mentioned that the US Mint has eliminated the hinged clamshell case for this release with no reduction in price.

Mine are still waiting to be picked up by the USPS.

Well, after contacting the Mint customer service asking why my enrollment for the 2021 W proof ASE was reduced from 3 coins to 2, I was told the issue was passed on to someone higher up to look into, and when they reached a resolution, they would contact me. As I expected, I heard nothing more from the Mint. I did receive 2 Eagles, but no answer as to why I only received 2 coins when my enrollment was for 3. And if that wasn’t bad enough, today I once again received an email from the Mint, suggesting I verify… Read more »

Well the mint is jamming me.I was in the enrollment program for 1 coin .My order was confirmed and now it’s canceled..Cr. card good till 25 so how do you explain that…

I reported earlier that my enrollments for SAE vanished, I have called customer service and they were to pass the information along and I would hear from them. That hasn’t happened nor do I expect to get any information as to why the enrollments vanished. Now here is something else that they have done to my enrollment for the S mint Mark coming out September 12, the status was updated to inactive twice so watch out for this if you have enrollments.

The S mint mark comes out August 12 its the uncircumcised that comes out in September.

Type 2 Silver Eagle I want to share that the 2021 silver eagles have a flaw or defects in them. If you look at your 2021 eagle closely , the flag on lady liberty has a defect in it, it is the tip that is closest to the shortest sun ray, count the sun ray from left to right number 8. the flag is not smooth the seams are broken. compare it with the older eagles. They also change the letter U. look at it, it is the one that says, In God we Trust. compare it with the old… Read more »