A new series finish and mintage low lends support to the U.S. Mint’s latest product, the 2020-W $25 Uncirculated American Palladium Eagle, while a $3,000 price weighs against it.

The uncirculated coin is composed of 1 ounce of .9995 fine palladium. Each bears designs originally created by world-renowned designer and medallic artist Adolph A. Weinman.

This collectible continues the U.S. Mint’s program of American Palladium Eagles which saw its inaugural release in 2017. Public Law 111-303 authorized the Secretary of the Treasury to strike and issue palladium coins. The series debuted three years ago and has seen one coin released annually with varying finishes. They coins include:

Weinman’s 1907 American Institute of Architects Gold Medal reverse design featuring an eagle and a branch are depicted on the coin’s reverse (tails side). Inscriptions include "UNITED STATES of AMERICA," "$25," "1 OZ. Pd .9995 FINE" and "E PLURIBUS UNUM." Pd is the chemical symbol for palladium.

The 2020-W $25 Uncirculated American Palladium Eagle is available today beginning at Noon ET from the U.S. Mint’s online page for palladium products, found here. An initial household order limit of one coin is in place.

Pricing for collectible Palladium Eagles can change weekly depending on the market price of palladium and the Mint’s pricing matrix.

Nice coin but too expensive. I don’t collect these. Gold only.

Only about a $650 premium over spot palladium price for just an Unc. coin! Lol.

Still not sold out though, even with the 10,000 mintage. Price is too high and too many people are jobless and struggling during this pandemic. I’m guessing they knew that it wasn’t going to sell out quick and that’s why they put a 10,000 mintage on it?

10K mintage makes it interesting but the price and presentation? Still available for sale at the mint. BTW, looks like thieves our stealing catalytic convertors on Prius vehicles. Palladium and Platinum content is the reason.

Very expensive. Is this the most expensive coin offered by the US Mint?

I’m surprised that there was such little news and discussion about this coin in the days prior to its sale. Maybe the price squashed the interest.

Buffalo gold 2019 was the last to offer a wooden box.

I bought one, even though they are way overpriced. I have the other 3, so I just couldn’t resist buying it so I can have the full collection. Does anyone know when this program ends? Or are they going to keep releasing the palladium coins forever, like other American Eagle coins?

Federal Law mandates these coins. Unless Federal Law is changed, there will be Palladium coins…

Thank you for this information. Just what I was looking for.

Mike Mezack will get his share and send them off to ANACS for the “BIG” FLIP…JUST UNDERSTAND!!!! Run Forrest Run!!!!

APMEX already has them listed at $3,500. Preorder only.

Got one at 9:01 PDT . What can I say, I’m one of those Pd addicts. I hope they are “unavailable ” because they sold out all 10K but I doubt it. And some dealers obviously got some first to be offering graded flips.

I think the Pd price run-up has been yet unexplained and that it’s something other than in Cat Converters for ICE cars. A coincidence that Tesla’s new battery technology was called “Project Palladium”? I think not. So my hunch is that soon Pd will be just as important to electric and Hydrogen car manufacturing.

Didn’t know you could do that ! What great customer service. And no restocking fee. 😉

Why???? Either you want it or you don’t; or you are simply a flipper.

The reason is-The company I work for is closing the doors in Dec leaving alot of people out of a job .I worked there 40years!

Lot a rich people in the world wow! Is right if sold out guess people are not hurting as the news states!

Some are and some aren’t

What’s 1% of 330Million? That group has more than ever before.

I ordered 1 @ 10am MST and I got it through in under 2 minutes at 10:21 I got the confirmation email. . I have the other 3 so I figured I better keep my set current. I submitted the 2019 one to PCGS at the show in Las Vegas Nevada last week. My 2018 graded 69DCAM. Unfortunately it had a Mark on the rim I didn’t realize when I submitted it.

Per PCGS, a mark on the rim would not prevent it from grading at 70. I have a 2017 graded by PCGS at 70 even though two marks (not severe) are on the rim.

As a silver eagle and mint collector I’m so excited to see these at only $900 above spot for a $3,000 coin I don’t have the cash for now I can wait a couple more weeks for these to be advertised on various cable coin shows with a fancy ABC 123 grading and payment plan for about $10,000 but they’ll offer a 60-month payment plan and put it in a nice little box I can’t wait….

as of 10 AM EST, they are available again. i ordered one.

I ordered one yesterday just past noon, not knowing whether a sellout would happen with a $3,000 coin. Fortunately (or Unfortunately) I have the other 3. This one, with the lowest (10,000) mintage, will be the series key (until next year?). Not as pretty as the proofs from 18 and 19. Saw them go “un-available” yesterday afternoon, and come back on this morning. Something tells me the “re-availability” might be credit card issue based cancelled orders from yesterday, though we have know way of really knowing. With this coin, the mint has just reduced the number of completed sets possible… Read more »

“REMIND ME”﻿ is on the US Mint Web Site now… I think the American Eagle 2020 one Ounce Palladium Uncirculated coin is SOLD OUT… I ordered one yesterday.

OK, so the coin arrived today and it is going back. The inside rim evidences die erosion; small bits of the die broken off that leaves a very thin shiny granular line where the inside edge of the rim should be a crisp line separating the rim from the face of the coin. Coins were available again today, so I ordered a replacement already. If the next one is the same, that will be sent back too. I’m guessing there will be fewer “70”‘s of this issue as a % than for the first 3 issues. 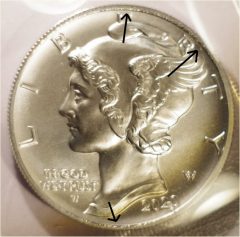 Can you post a higher resolution photo showing this? Thanks.

Only here and at the bottom of the obverse. Doesn’t bother me, gives it character! 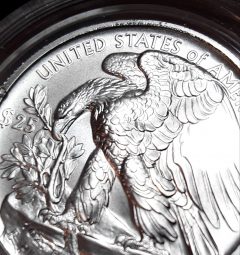 I bought 2. Both arrived today. Both have the same blemish but only on the bottom. My wife says it looks like strike was off center. If that’s the case, would these be worth more?

I looked at my coins closer and did some research. Both have what is called a collar clash. It effects the thickness of the rim and the reeded edge. Also on mine you can actually see a faint “railroad track”. I’m wondering if this mint error is worth anything. Any ideas?

My 2 arrived yesterday and I could not open the seals. Did look closely at the 2 and I am okay with the minor imperfections at the inner rim. Although they may also be reflections off the face of Liberty onto the edge. I much prefer this year’s over the high mirrored version of 2019. At only 10,000 mintage and now nearly sold-out, this is a keeper. In my view.

I uploaded a short 4K 2160p videos of my palladium coins here: 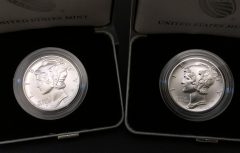 Hi Grant, I purchased one of these 2020w coins last week directly from the US mint and it has these same marks. I too am wondering if it can be a true die error coin, thereby being more valueable. I’m not sure, but I believe that in order for them to be documented as such, they need to be submitted to the NGC for the documentation to even occur. I don’t know if the US mint will do this on their own. So!, …how can we spread the word to have all owners of these submit them for die error… Read more »

unavailable … what is going on -i dont think its a sell out??.

I’m guessing, the ‘flippers’ have freaked out. Realized they might not make their 2k flip on eBay and can’t afford to pay their credit card, without it…so, they’ve cancelled their orders.

The Mint has an utterly ridiculous flaw in their returns policy. It’s great that it protects those who have suffered changes in finance etc., but really, it allows the flippers, to either make a lot of money out of us…or not lose any.

Toooooooo expensive. Would have loved to see this design on a one ounce dollar coin annually with the ASE

The 2019W Reverse Proof is the best of the four, even at 30,000 minted. One of the nicest coins I have ever purchased.

that cracked me up!

Thanks once in awhile! Hurry only <99 left TODAY

sales thru sep 27-9971. interesting as theyre available this morning

Mike Mezack just got his returns back from ANACS and shipped them back to the mint. They will have more available at the mint for sale today,only $3000!!! HURRY!!! Go Forrest Go…

I like it! Yes, so what if there are strike problems! Its bought and paid for, on to the next big ticket item!

This is BY FAR my favorite coin design… the issue is that pd is in a bubble price and likely to drop back closer to 1000/oz if and when pt is transitioned into catalytic conversion (which has already begun). At the same time, pt is comparably cheap, and likely to go up from here – and while I collect the pt eagles I think this coin is better looking. Again, my concern is the price is too high and you could be left with a coin that is not rare enough to retain the value with a pd price under… Read more »

price now from us mint is $3100.even though its unavailable