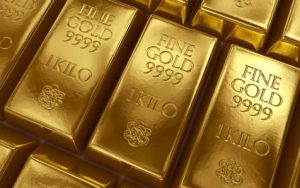 Gold futures started the new trading week lower on Monday, closing down for the first time in three sessions and backing off from a more than two-month high.

In bullion coin news, United Mint sales of its American Silver Eagle topped 4.5 million for the month-to-date. Just three other months are stronger in the Silver Eagle’s 28-year history.

There are "worries in the market place early this week that the U.S. Federal Reserve will continue to reel in its easy-money policy this week, which ostensibly soaks up some liquidity in the world market place, starting with the periphery currencies," Jim Wyckoff, a senior analyst at Kitco Inc, said in a daily note.

"Tuesday and Wednesday the Federal Reserve’s Open Market Committee (FOMC) meets to set its monetary policy. There is a general belief, albeit not a clear consensus, that the Fed will do another $10 billion tapering of its monthly bond-buying program."

Last week, gold rose 1% to score a fifth straight weekly gain and settled at its highest price since Nov. 10.

In PGM futures on Monday:

Here is a sales breakdown across all United States Mint bullion coins: