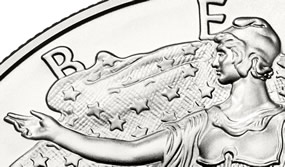 Gold fell below the pivotal $1,350 an ounce level on Tuesday, marking a second day of losses, albeit modest ones, as investors stayed their buying ahead of the highly anticipated FOMC monetary policy statement.

In an article entitled "Gold falls, with Fed ‘distraction’ for bull, bears," MarketWatch relays the following comments from Gene Arensberg, editor of the Got Gold Report:

The gold market reached a "pretty important technical crossroads with gold in the $1,350s. Between $1,350 and $1,375 is (an unknown but almost certain) point of transition where the ‘maybe new bull-market leg’ becomes a ‘confirmed new bull-market leg’, which would invite participation by momentum traders in larger numbers."

"On the other hand, below about $1,325 (if sustained) would signal that this current, surprisingly firm bullish impulse has failed, at least for the short term," he said.

Fed policy makers kicked off their two-day meeting Tuesday with the FOMC statement timed for release at 2 p.m. ET on Wednesday.

"In line with market expectations, we think the Fed will continue with quantitative easing," Reuters quoted Songwut Apirakkhit, managing director of Globlex Holding Management in Bangkok. "However, we think the expectations have already been priced in and gold is due for a correction."

Most recently, gold prices rallied 2.9% last week after during 3.7% in the previous week.

Silver tracked gold on the day, and has fallen for three straight sessions. Silver for December delivery settled down 5 cents, or 0.2%, to $22.49 an ounce. Prices ranged from $22.30 to $22.63. The white metal on Monday closed a dime lower after slipping 18 cents on Friday, though it still scored a 3.3% weekly gain.

In PGM future prices on Tuesday:

FOMC = ?? For those of us who are not as deeply entrenched as some in the coin/financial world it would be really helpful if anacronyms were explained whenever they are used so that everyone knows what is being talked about. THANKS!! H.A.N.D.–Have a nice day! 🙂

Federal Open Market Committee. You can Google the terms

The only thing that these high mintages insure is that the newer mintages will never attain the high dollar collector value that the lower mintages in the 80’s and 90’s have. Especially true in an MS 70 grade.

I shake my head when I see ads in magazines showing the high value of early MS 70 coins as a selling point for newer Uncirculated MS coins. They fail to mention the much lower mintages.
Again, Buyer Beware!

* I was refering to Uncirculated American Silver Eagles.