Coin & Numismatic News ‘In God We Trust’ to Stay on Coins and Currency, Says Court 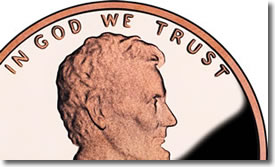 The motto "In God We Trust" on United States coinage can remain, according to a recent opinion of the 9th U.S. Circuit Court of Appeals (http://www.ca9.uscourts.gov/).

The three-judge court panel ruled unanimously that the inscription could stay on both coins and currency, rejecting arguments saying the motto violates the separation of church and state.

Michael Newdow of Sacramento, California had brought about the suit calling the constitutionality of the motto on American coins into question on the basis that it violates the Establishment Clause of the First Amendment.

This clause states "Congress shall make no law respecting an establishment of religion, or prohibiting the free exercise thereof," and has been the source of much controversy over the years for many reasons.

The first coin ever to be struck with the motto was the two-cent piece in 1864. It was placed there through the actions of Treasury Secretary Salmon P. Chase as a response to the bitter American Civil War which was currently embroiling the country.

After correspondence with Reverend N.R. Watkinson of Ridleyville, Pennsylvania, (as well as many others) it was felt that including an acknowledgement would show the federal government’s cause was a just one.

"This would relieve us from the ignominy of heathenism," Reverend Watkinson wrote in his letter proclaiming the benefits of including "God" on the coinage.

"This would place us openly under the Divine protection that we have personally claimed. From my heart I have felt our national shame in disowning God as not the least of our present national disasters."

By 1866, most US coinage included the motto except for a very few, the last of which was the Buffalo Nickel which appeared from 1913-1938. In 1955, Congress mandated that it must be inscribed on all coins.

According to the filed opinion of the three judge panel, Newdow’s claims were foreclosed by a previous decision by the Ninth Circuit on a similar matter – Aronow v. United States, 432 F.2d 242 (9th Cir. 1970), and affirmed by many other decisions in other courts. In this specific case, the court concluded that:

"It is quite obvious that the national motto and the slogan on coinage and currency ‘In God We Trust’ has nothing whatsoever to do with the establishment of religion.

Its use is of a patriotic or ceremonial character and bears no true resemblance to a governmental sponsorship of a religious exercise."

Two of the three judges concurred with this decision. Judge Stephen Reinhardt concurred in the result only stating that:

"Because I am now required to follow that precedent, no matter how misguided, I am also now required to conclude that Newdow’s claims in this case are foreclosed by Aronow, and therefore to concur in the result."

He goes on to state that he may have reached a different conclusion if not bound by precedence.

An appeal by Newdow is expected.

I would just rather both the “In God We Trust” and “E Pluribus Unum” mottos be optional. If the artwork of the design permits its inclusion unobtrusively then present them. Otherwise leave them off.

The Roosevelt dime would look considerably less cluttered if “E Pluribus Unum” were removed from the reverse. So often those mottos appear like afterthoughts rather than genuine elements of the design. The Standing Liberty Quarter incorporates “In God We Trust” beautifully. Even the small Lincoln Memorial cent incorporated every motto without feeling cluttered.

I think it is perfectly ironic that “In God We Trust” appears on our money, of all things.

What an empty life Mr. Newdow must have, to devote so much time to this.

i could understand someone complaining if it was just recently added to coins/currency.

but since it has been on there since 1864 and it is the motto and princilples of what this country was founded on, it has it’s place being there.

if you might be offended, tough nuggies, deal with it.

there are alot of things in this world that i don’t agree with, but for the sake of history and tradition, i live with it.