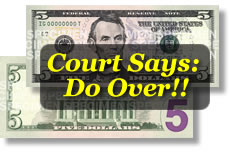 The U.S. Court of Appeals for the District of Columbia Circuit upheld a 2006 district court ruling that could result in new banknote designs that are more distinguishable for the blind and visually impaired.

The appeals court ruled today by a 2-1 vote. It upholds the 2006 ruling by U.S. District Judge James Robertson in a lawsuit filed by the American Council of the Blind that claims the U.S. Department of Treasury is violating the Rehabilitation Act with its paper money.

The Rehabilitation Act was created to extend rights to disabled individuals so they can fully participate in society, and it includes a variety of provisions focused on rights, advocacy and protections.

The American Council of the Blind proposed changes — similar to many already made by other countries — that would make U.S. paper money compliant with the Act. But the Treasury Department argued they would impose and undue burden.

The appeals court majority ruling said the Treasury Department failed to show why that was the case and disliked their logic on another argument about how the disabled have already adapted to today’s currency.

Currently, there is no announced decision as to the Treasury’s next move.

For another take on this story, read the following embedded CBC News article.

Why did it take 9 years for an appeal to work its way through the courts?