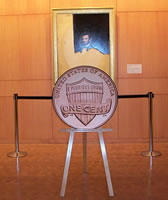 The United States Mint officially launched the 2010 penny from inside the Abraham Lincoln Presidential Museum in Springfield, Illinois on Thursday, February 11, 2010.

The US Mint calls the new coin the "Preservation of the Union One-Cent," but many collectors are referring to it simply as the Lincoln Shield Cent. The new design is expected to be used for the next 49 years, according to the speech given by US Mint Director Edmund Moy during the ceremony.

The following photos recap some of the events on release day in Springfield. Several of the photo captions provide interesting behind the scenes information. 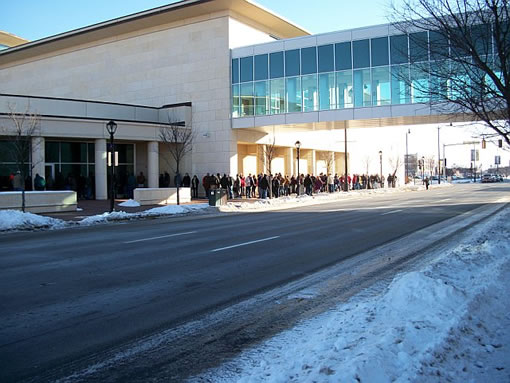 At 8:45 AM, the line to attend the 2010 Lincoln Shield Cent ceremony and coin exchange at 6th and Jefferson wrapped around the first corner of the Presidential Museum and nearly reached the second corner at 7th street. Approximately 300 people were waiting at this point point. 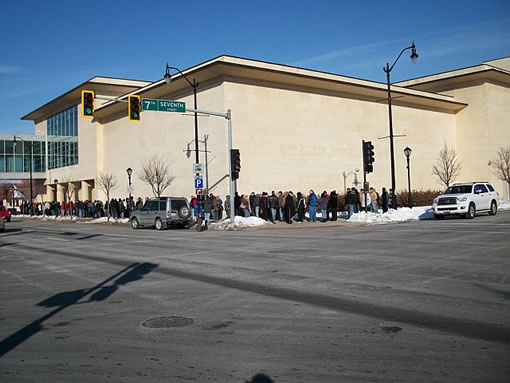 A few minutes before 9:00 AM, when the doors were about to open, the sidewalk was packed and the line to the ceremony and coin exchange wrapped around the second corner of the museum. The outside temperature was still less than 10 degrees Fahrenheit. Traffic along the streets increased. 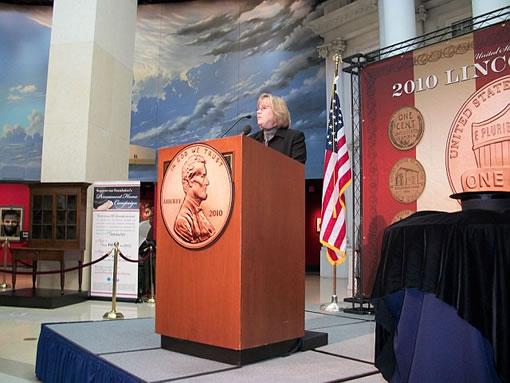 Promptly at 9:30 AM, recorded music started the penny launch and acting Executive Director of the Abraham Lincoln Presidential Museum and Library (ALPLM) Jan Grimes welcomed everyone to the museum, ceremony, and coin exchange. The 20 minute ceremony took place within the rotunda of the museum, and the coin exchange began immediately afterwards on the other side of the room. 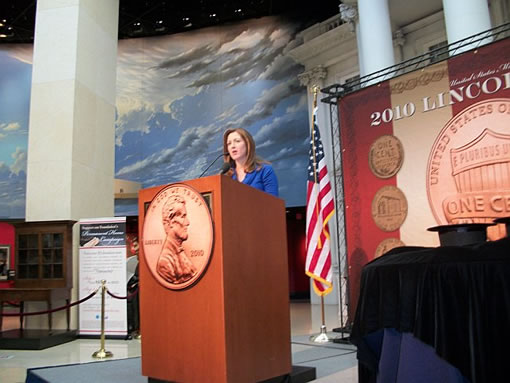 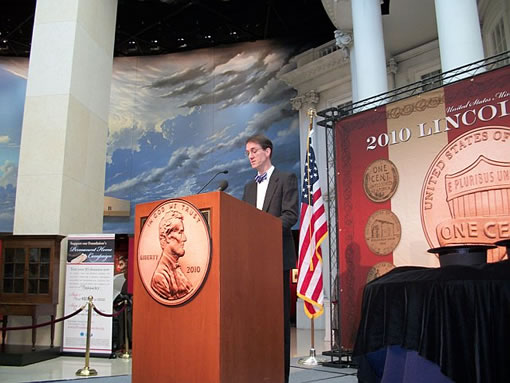 James Cornelius, Curator of the Lincoln Collection at the ALPLM, spoke about the influences that made Abraham Lincoln a virtuous man. The beginning of his five minute speech was printed inside the official event program. In his concluding remarks Cornelius said this of Lincoln, "With iron, steel, velvet, and gold, he made us indivisible." 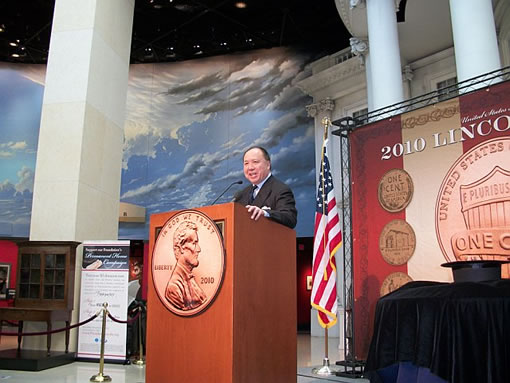 US Mint Director Edmund Moy also covered Lincoln’s importance, and then he described the symbolism of the new reverse design on the 2010 cent. The design’s theme honors Lincoln’s commitment and greatest achievement, a united country, hence the new cent’s name, the "Preservation of the Union One-Cent." Lincoln’s portrait on the obverse was also updated by the Mint. It was digitally remastered to better represent Victor David Brenner’s original plaster of the 16th President. 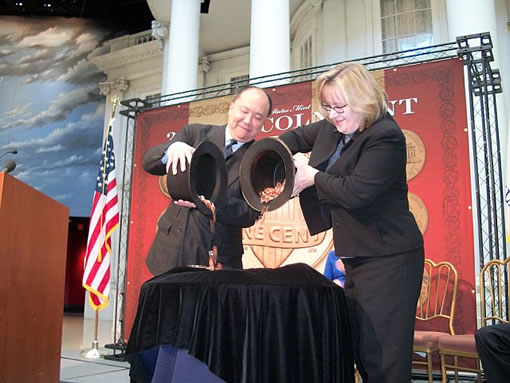 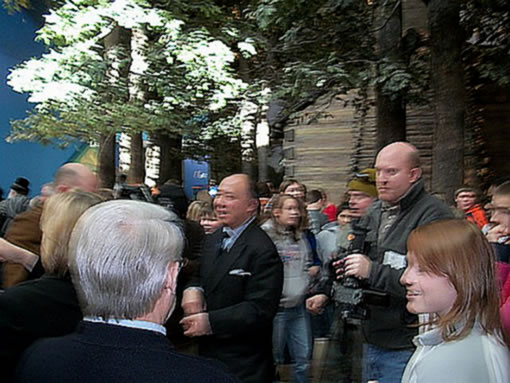 US Mint Director Edmund Moy was swarmed by photographers as he handed out free 2010 Lincoln Cents to children at the ceremony. Moy also autographed several event programs. Some attendees traveled from other states to attend the formal release in Springfield. For many, it was not their first coin release. 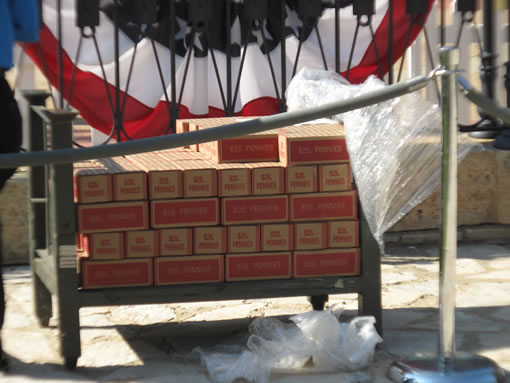 US Bank employees lined up $25 boxes of the Lincoln pennies for the coin exchange, like those shown above. Each coin roll contained 50 pennies. Several empty boxes were also available at the table for anyone who asked for them. 20,000 rolls (totaling 1 million pennies) were exchanged at Springfield’s ceremony. The pennies were minted at Philadelphia and do not have a mint mark. 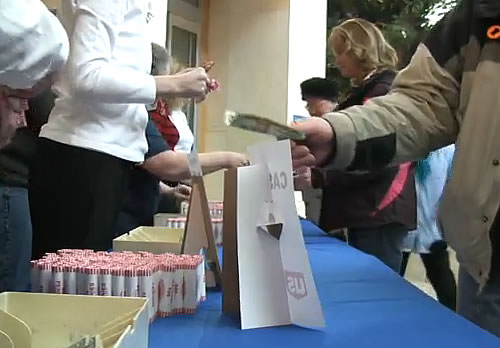 US Bank employees exchanged cash for rolls of the new cents at six cashier stations. There was a minimum of two rolls and a maximum of six rolls per person in place, although attendees could go through the line as many times as they wanted until the coin roll supply was depleted. More than 1,000 people participated in the coin exchange, and the last roll was swapped shortly after 12 noon. 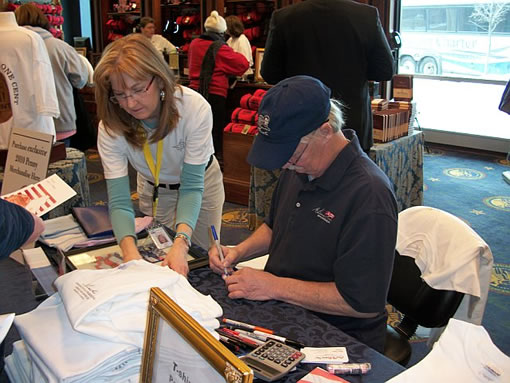 Designer of the pictorial USPS cancellation postmark, Chuck Taylor, was at the ALPLM in the gift shop. He signed penny rolls and other merchandise following the coin launch ceremony. The wait time for his autograph took longer than the exchange. 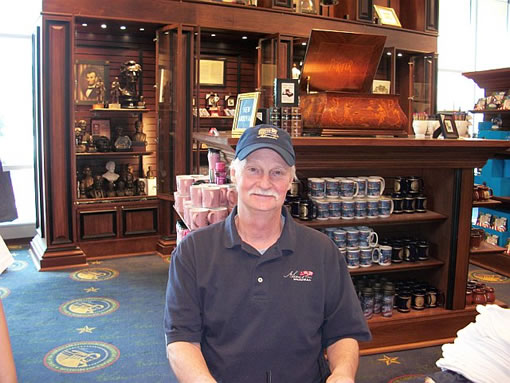 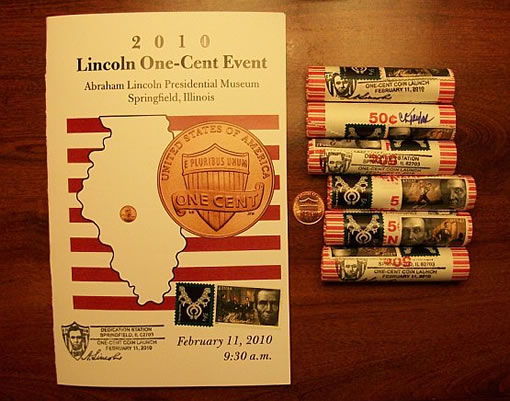 Each ceremony attendee received an official event program while in line for the coin exchange. After getting the coin rolls, many collectors drove to the Post Office on Cook Street, which was several miles away from the museum.

There were two lines there as well. The first line was for purchasing stamps. Many people opted for the Abraham Lincoln stamp as shown on these canceled rolls. Since the stamps were 42¢, another 2-cent stamp had to be added. The second line, and one that was much longer, was for getting the coin rolls and other products postmarked with the pictorial USPS cancellation postmark.

Six postal employees were seated at the tables, so everything moved fairly quickly. At 12:30 PM, which was after the coin exchange had ended, both lines easily doubled in length.

The regular USPS circular date cancellation postmark (Feb. 11) was only given the day of the ceremony and up until 5 PM.

The pictorial USPS cancellation postmark, which has the date spelled out February 11, 2010, can still be obtained until March 13. To receive the cancellation, coin rolls must be dropped off in person, but flat items like postcards and event programs may be mailed in with a return postage to:

I hope they make them out of a cheaper metal next year. Go Steel!

So when can the “common man” (or woman) get our hands on the new cents, preferably at face value? Sincerely yours,
Charles K Miller

they should make an copper verson for the proof and mint sets like they did last year.

We heard they are going to make copper for Unc and Proof sets. We can hope.

WE ALL HAD A GREAT TIME AND A LOTS OF FUN