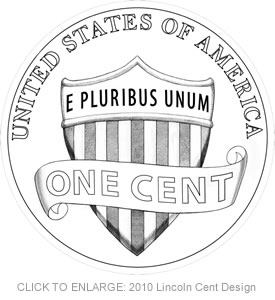 The US Mint on Thursday announced the ceremonial release date for the newly redesigned 2010 Lincoln Shield Cent.

The official launch will occur on Thursday, February 11, 2010 at 9:30 AM Central Time at the Abraham Lincoln Presidential Library and Museum in Springfield, Illinois.

The city is a popular destination for those wishing to follow in the footsteps of Lincoln, as it is there where he spent most of his adult life prior to becoming the 16th President of the United States.

Along with a plethora of other Lincoln related sites, to include the museum and the historic site where he lived, Springfield is home to Lincoln’s Tomb.

The new Lincoln "Preservation of the Union" penny is emblematic of President Lincoln’s "preservation of the United States of America as a single and united country." The reverse features a union shield with a scroll draped across it bearing the inscription E PLURIBUS UNUM. The 13 vertical stripes of the shield represent the states joined in one compact union to support the Federal government, represented by the horizontal bar above.

The union shield dates back to the 1780s and was used widely during the Civil War. In addition, the shield device is featured on frescoes throughout the halls of the U.S. Capitol Building by Constantino Brumidi, artist of the Capitol during Lincoln’s presidency. It was designed by Lyndall Bass and engraved by Joseph Menna.

The ceremony in the Abraham Lincoln Presidential Museum is located at 212 N. Sixth Street,
Springfield, IL.

Following the event, children 18 years and younger will receive one of the new pennies while adults can exchange cash for between two and six rolls of the coins.

On the same day, the cents will be available at the counters of Union Station in Washington, D.C., and at the U.S. Senate’s credit union. Both are open from 10 AM to 4 PM ET.

The 2010 Lincoln penny launch will be the second held in Springfield, Illinois within a year. In celebration of the 200th anniversary of Lincoln’s birth, the third redesigned 2009 Lincoln Professional Life Cent was released there on August 13, 2009. (See photos.)

The 2010 penny bears the final design for the coin, unless a new law is passed.

With the blizzards that have hit (and are hitting) D.C., I am doubtful that the roll exchanges will be occurring in the city on Thursday. Hopefully the festivities in Illinois will be, and equally hopefully the D.C. exchange will be rescheduled.

When will the 2010 Preservation of the Union penny be available to the public? I can’t find where to buy rolls.