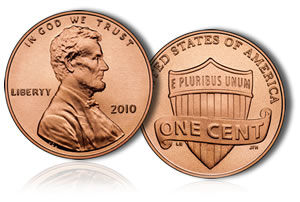 Rolls of new 2010 Lincoln Shield Cents will be available for cash exchange at two locations in Washington, D.C., on February 25, 2010.

The original exchanges were canceled due to two blizzards that ran through the national’s capital and closed down the federal government for four straight days.

As a part of the celebratory release of the new pennies which officially launched in Springfield, Illinois on February 11 — the day prior to the 201st anniversary of Abraham Lincoln’s birthday — the original exchanges were to be held at the United States Mint’s Headquarters Building, 801 9th St NW, and in Union Station, 50 Massachusetts Avenue NE.

The rescheduled D.C. area exchanges will occur at the same locations on Thursday between 10:00 AM – 4:00 PM Eastern Time (ET) or until the penny inventory is exhausted. Collectors will be able to swap for between two to six rolls of the coins.

During the Springfield release, collectors lined up in subfreezing weather (below 10 degrees) to exchange money for Philadelphia struck Lincoln penny rolls, with many making more than one pass. US Bank employees handed out 20,000 rolls totaling one million pennies. (See behind the scenes ceremony photos.) Most collectors took the rolls to the Post Office to have them officially stamped with a pictorial or a regular circular date cancellation postmark.

The US Mint has indicated it will offer two-roll sets of the coins — both from Denver and Philadelphia, and Mint wrapped, sometime in spring. Pricing is expected to be $8.95, plus $4.95 shipping and handling.

The 2010 Lincoln cent has a metallic content of 2.5 percent copper, with the balance being zinc and, according to the Mint, will be issued for circulation in quantities to meet the demands of commerce.

The new penny reverse is emblematic of President Lincoln’s preservation of the United States of America as a single and united country. Designed by Lyndall Bass and engraved by Joseph Menna, it features a union shield with a scroll draped across it bearing the inscription E PLURIBUS UNUM. The 13 vertical stripes of the shield represent the states joined in one compact union. The design will appear on one-cent coins from this year forward.

Big deal! What moron thought it was a good idea to release them in January, in of all places, Puerto Rico? Can’t this government do any damn thing, correctly?

i got a roll from the bank and sold it to an dummy for $10.i can’t beleave people will pay crazy prices but i’m glad that they do.

WILL THE US MINT BE SELLING THE 2010 LINCOLN CENT IN MINT ROLLS….

“The US Mint has indicated it will offer two-roll sets of the coins — both from Denver and Philadelphia, and Mint wrapped, sometime in spring. Pricing is expected to be $8.95, plus $4.95 shipping and handling.”

Just look up and read the article.