Demand for 2009 Eagle Gold Bullion Coins has declined to the lowest level of the year, but sales still recorded the 5th best May ever for a series that dates back to 1986. Further, 2009 continues to be the strongest year of sales for the bullion coins since the Y2K safe-haven buying in 1999. 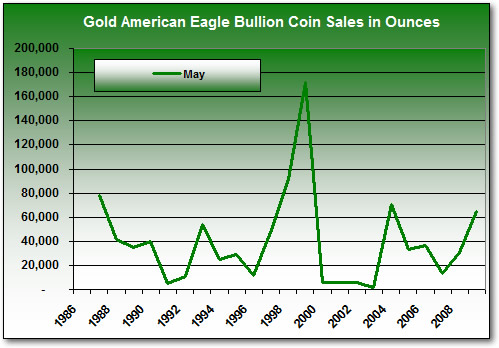 The US Mint reported selling 65,000 American Eagle Gold Bullion coins in May. Historically, the month has never been exceedingly strong for the series, and 2009 is no different despite its record start. Sales dropped by more than half compared to April, which was the best performing month of the year with 147,500 eagles sold. Still, May trailed only behind same month sales in 2004, 1999, 1998, and 1987. 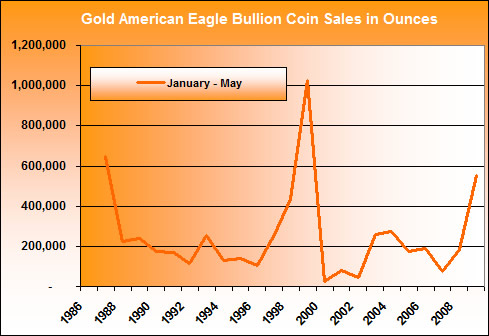 As a bit of background, in mid March the US Mint suspended collector gold eagle production. Citing "unprecedented demand," and its mandated requirement to produce gold bullion coins to meet public demand, the Mint said it would not strike collector proof or uncirculated options until "sufficient inventories of gold bullion blanks" were acquired to meet "demand for all three American Eagle Gold Coin products." It also rationed supplies of the bullion eagles.

The US Mint strikes eagle bullion versions for authorized dealers, who then sell to the public. For the first time in 2009, dealers in early May declined to order the maximum number of eagles, leaving a reported 39,000 one-ounce gold American Eagles for the Mint to sell later. For many observers, the change signaled the potential end to the American Eagle shortage, and the beginning of lower gold coin premiums in the secondary market.

However, gold prices began to rally in mid May, shooting 10 percent higher on the month and nearing $1,000 an ounce. (Spot bullion prices opened Tuesday morning at $980 an ounce.) With gold rising, it seems less likely than before that the collector eagles versions will get struck — at least in the very near term.

As far as the latest gold coin premiums, prices had declined in May. However, as current eBay auctions for 2000-2009-dated American Eagle Gold Bullion Coins

show, prices have since increased along with gold.

As a final note of interest, the below chart shows comparative monthly sales of the bullion coins. 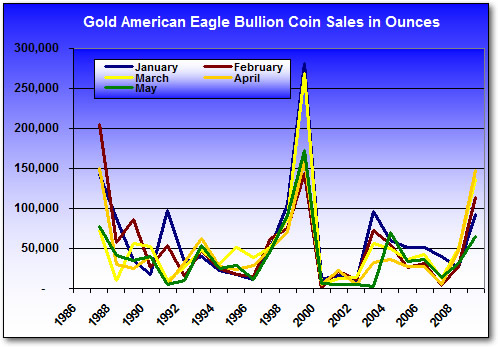