The United States Mint sold more American Gold Eagle bullion coins in November 2010 than in each of the previous three months, with the largest one-ounce size comfortably leading sales. 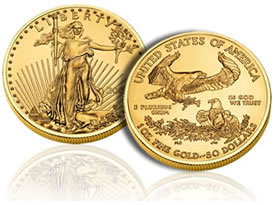 The fractional one-half and one-quarter ounce sizes doubled their previous monthly performances, but the smallest one-tenth ounce size recorded its worst month since the fractional Gold Eagles launched in June.

US Mint published figures show 112,000 ounces of the 22 karat Gold Eagle bullion coins were sold in November. That easily outpaced the 94,000 ounces in October, the 88,000 ounces in September and the 41,500 ounces in August.

The following table provides a breakout by month and gold coin size — both in total ounces and in the number of coins sold.

While sales have increased for three consecutive months, levels have been weaker as compared to the same months since 2008 when Gold Eagle bullion demand noticeably shot higher. However, the separation gap shortened last month as highlighted in the following chart showing November sales dating back to the series launch in 1986. 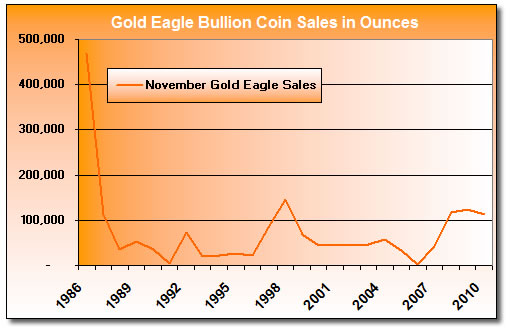 The difference between last November and November 2009 was 12,000 ounces. 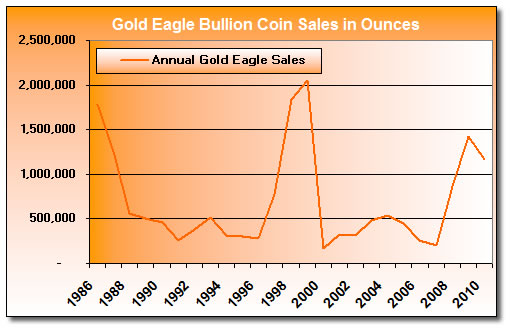 The 2010 Gold Eagle bullion coin should not be confused with 2010 Proof Gold Eagles which went on sale on October 7. United States Mint bullion coins do not have collector proof finishes and they also do not have the West Point “W” mintmark. Additionally, the Mint does not sell bullion coins directly to the public like it does with proof eagles or other collector coins. Instead, the Mint uses a network of Authorized Purchasers who buy bullion eagles in quantity, and then resell them for a small premium over the current gold spot price.