2009 American Eagle Gold Bullion Coin sales are off to the quickest start in ten years and have recorded the third best performance since the series began in late 1986, according to the latest United States Mint coin sales statistics. 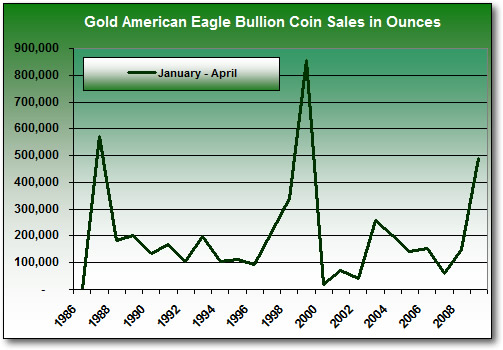 From January through April, the US Mint has sold 489,500 eagle gold coins to its authorized dealers. That trails only behind the Y2K explosion of safe haven buying of bullion in 1999, and then the inaugural leading months in 1987 after the coins were first introduced. (The Mint sold 855,000 ounces of bullion gold coins in the first four months in 1999 and 570,000 in same months in 1987.) 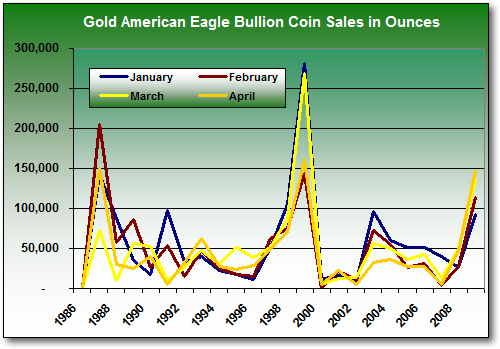 The month-by-month comparison chart reflects how demand for the coins has fared against past years, and intriguingly, how it is actually picking up in 2009. Comparing all months this year, April sales were the strongest with 147,500 one-ounce coins sold.

Similar to the silver eagles, the huge demand has resulted in downsides for buyers and collectors. The three biggest include:

In mid March, the US Mint suspended 2009 collector eagles. Citing "unprecedented demand," and its mandated requirement to product gold bullion coins to meet public demand, the Mint said it would not strike collector proof or uncirculated options until:

"Sufficient inventories of gold bullion blanks can be acquired to meet market demand for all three American Eagle Gold Coin products. Additionally, as a result of the recent numismatic product portfolio analysis, fractional sizes of American Eagle Gold Uncirculated Coins will no longer be produced."

The latter segment of the statement also highlights why it is only producing 1-oz coins. In a typical year, the Mint also strikes 1/2 oz, 1/4 oz and 1/10 oz sizes, which makes it possible to invest in gold bullion coins with smaller budgets.

Finally, another huge negative is the increase in premiums, which are significantly higher compared to past years because demand is higher and supply is lower.

, or run a Google/Yahoo search for coin dealers selling them. Common premiums for the one-ounce coin sizes are significantly higher than the current spot price of gold. And based on the level of bidding, buyers are willing to pay more.

As another comparison to consider, the Mint sold 860,500 ounces of eagle bullion coins in 2008, which was an exceptionally strong, historical year for sales. In just four months of this year, the Mint has sold more than half that amount, and is currently paced at an incredible annual rate of selling 1,458,500 ounces for 2009.