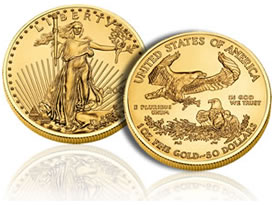 United States published coin sales figures show 94,000 ounces of the eagles were sold last month, up from the 88,000 in September and the 41,500 from August.

May continues at the top spot for 2010 with 190,000. The monthly totals include the one ounce Gold Eagle as well as the three fractional 1/2 ounce, 1/4 ounce, and 1/10 ounce sizes. Although total ounces were higher in October, slightly fewer fractional 2010 Gold Eagles were sold as compared to September.

October 1986 remains the best ever month for the eagles with 692,000 ounces sold, representing just over 1 million coins. The date marked the first time the 22 karat bullion coins were available, which naturally inflated sales. American Gold Eagle bullion coin demand starting ticking substantially higher during the second half of 2008, and last month was the sixth best October since the series debuted. However, the performance lagged the same month sales in 2009 and in 2008. Overall demand is slipping from its latest peak to some degree. 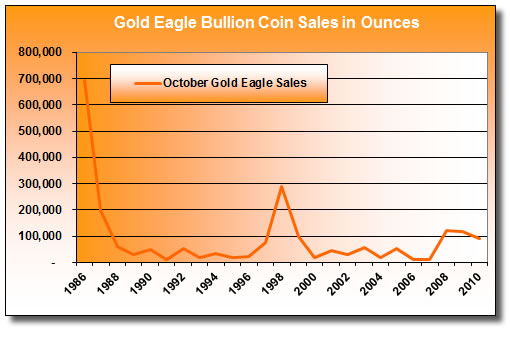 Still, 2010 will be one of the best years for the gold pieces. Year-to-date sales already rank as the sixth best, and there is still two months left in the year that will be added into the mix.

Although Gold Eagle sales historically picks up in November and December, it does appear that the final 2010 tally will fall behind the 1.425 million ounces sold in 2009. 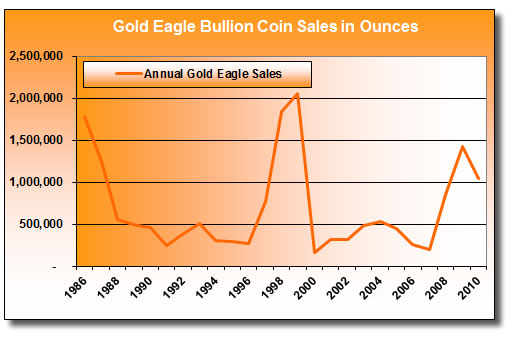