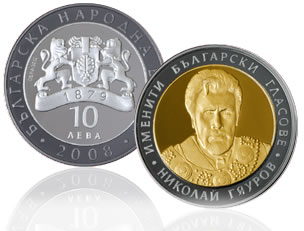 "His fans experienced rare moments of delight and his family surrounded him with love and gratitude throughout his 50-year long career. Everything he did during his remarkable life, the great singer devoted to his motherland Bulgaria."

Nikolay Gyaurov’s career spanned some 50 years. He died in 2004 and was considered one of the 20 century’s greatest bass vocalists.

The commemorative was designed by Elena Todorova and Todor Todorov. It is limited to 6,000, and is composed of .999 silver, with a bilateral oxidation on the outer ring.

The reverse inner circle of the coin is golden plated and depicts Gyaurov in one of his famous roles as King Philip II in opera "Don Carlos." Around the outer ring is "Nicolai Ghiaurov and estate Voices of Bulgaria" spelled in Bulgarian.

The inner circle of the obverse, or heads side of the coin, is a represented emblem of the Bulgarian National Bank with the year "1879." Directly below is the denominated value BGN 10. The outer ring includes the year "2008" and Bulgarian spelled "BULGARIAN NATIONAL BANK."

The coin weighs 31.10 grams, has a diameter of 40 millimeters, a high matt-finish and a smooth edge.

BNB announced the commemorative silver coin will be in issued on Monday, October 27, and will be sold in boxes of BNB for a price of 72 leva (VAT).