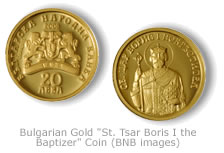 Boris I ruled Bulgaria during the ninth century. He converted to Christianity, was baptized, instructed others to follow, and eventually abdicated the throne and became a monk.

The commemorative was designed by Krassimir Anguelov, Borislav Kyosev and Razvigor Kolev, with the following designs descriptions provided by the BNB:

The reverse of the coin features the canonical image of St. Tsar Boris I according to the Christian Orthodox iconography, with the wording "СВ. ЦАР БОРИС І ПОКРЪСТИТЕЛ" ("ST. TSAR BORIS I THE BAPTIZER") in circumference.

The obverse of the coin features the logo of the Bulgarian National Bank with the year "1879" written on the ribbon. In the circumference is the wording "БЪЛГАРСКА НАРОДНА БАНКА" (BULGARIAN NATIONAL BANK), the nominal value of the coin "20 ЛЕВА" and the year of issue "2008."

The price of the coin on sale at the BNB cash desks is BGN 100. (See currency converter.)