The latest bimetallic coin within the Swiss National Park commemorative series was issued Friday, according to a statement by the Federal Mint Swissmint. The third and second to last coin in the park series depicts the Red Deer, which was close to extinction by 1850 and has since rebounded. 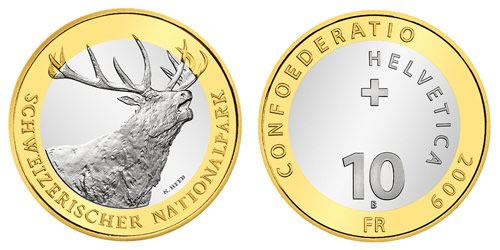 The outer ring of the coin is made of aluminum-bronze and the inner core from copper-nickel. The Red Deer is portrayed within the inner circle of the reverse as its antler tips reach toward to the outer rim.

Just a few centuries ago, the red deer lived in riverside forests on the valley floors. It was only in the summer months that they made their way to the more Alpine regions.

Settlement of the valleys, accompanied by clearance of the riverside forests as well as increased utilisation of the Alps, forced the deer to abandon their natural habitat and move to denser forests.

Almost extinct by 1850, they returned from Austria to the east of the country, especially the Canton of Grisons. From there, they gradually spread out once again to other parts of the country.

During the summer months, the red deer live in the National Park where they find peace and plenty of food. One of the park’s principal attractions is without doubt the rut, which takes place in early autumn. During this, the male deer fight one another ferociously to win the favours of the females.

Afterwards, the animals leave the National Park and spend the winter months on the sunny slopes of the main valleys in the Engadine, Val Müstair and Vinschgau. The female red deer live mainly in herds with calves and young animals, the male red deer in male herds except during the rut. From the second year of life, the male bears antlers, which it discards after each winter.

The Swiss National Park commemorative series started in 2007 with the release of the motif of ibex, continued in 2008 with the golden eagle coin and concludes in 2010 with a marmot themed coin.

The 10 Swiss Red Deer coin comes in uncirculated and proof conditions with limited mintages of 95,000 and 12,000 respectively. The new commemorative also supplements the legal tender Swiss coin sets for 2009. Additional specifications include:

The coins are priced at:

Each may be ordered online through the Federal Mint Swissmint page: