The Austrian Mint in Vienna has issued the last silver 10 euro commemorative in the six-coin series Great Abbeys of Austria. It is dedicated to the Benedictine Abbey of Seckau — a jewel of Romanesque architecture — in the province of northern Styria. 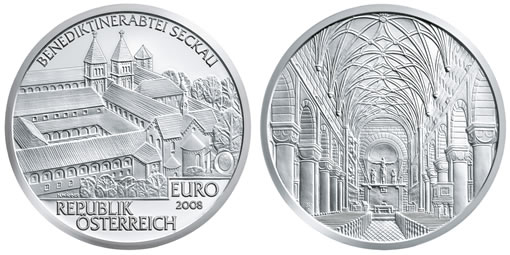 Seckau did not begin its existence as a Benedictine foundation. It was founded in 1140 as an abbey of Augustinian canons regular at St. Marein-Feistritz by a nobleman called Adalram von Waldeck – apparently as a penitential act for the death of his cousin. The place proved unsuitable, and in 1142 the abbey was moved to near-by Seckau. A year later Pope Innocent II placed the new foundation directly under papal protection. It was to be a double monastery with nuns (canonesses) from Salzburg forming a separate but adjoining convent. In 1150 they began to build the splendid Romanesque church which we still see today. In 1259 a fire destroyed much of the wooden ceiling and it was replaced with Gothic stone vaulting instead.

From 1218 Seckau was the seat of the new bishopric for Styria. The convent of canonesses was closed in the late 1500’s. The biggest change came, however, in 1782 when the Emperor Joseph II instituted a policy of closure of those monastic establishments which he classified as "unproductive". The bishop’s seat was transferred to Graz and the basilica of Seckau with its adjoining Baroque complex was left deserted for just on one hundred years.

Bismarck’s Kulturkampf in 19th century Germany caused Benedictine monks from the southern German Abbey of Beuron to flee for protection to Austria. Emperor Franz Joseph gave them refuge firstly in Tyrol and then from 1880 in Prague. Their increasing numbers forced them to see a second foundation, and in 1883 they bought the rights to Seckau. A new phase of life as a Benedictine abbey began. Three years later the north tower of the church collapsed and the monks rebuilt both towers more safely. In 1926 they opened a school. The Nazi take-over of Austria in 1938 brought renewed danger and Hitler himself ordered the Abbey of Seckau closed in 1940. All 86 monks were declared "enemies of the state". Seckau became an institution for "political education".

In 1945 the monks could return to what remained of their property after the losses during the war. Despite the loss of many of their art treasures, they succeeded in accumulating an impressive library of over 100,000 volumes. The school was reopened, and until 1997 one of the brothers ran a successful and well-known school for silver and goldsmiths.

The new coin shows an aerial view of the basilica and abbey buildings from the east. The cruciform church and the two great towers flanking its entrance are the dominant features. The reverse side shows a view of the nave of the Romanesque church down to the high altar, over which a medieval crucifixion group hangs dramatically on four massive chains. The Gothic vaulting of 1259 is very evident, while the rows of Romanesque arches give a depth to the design which is rarely captured on coins.

The new € 10 silver coin is struck in sterling (925) silver. A maximum of 60,000 pieces will be produced in proof quality, 40,000 pieces in special uncirculated, while 130,000 coins in circulation quality will be issued through the banks at face value. The proof version comes in an attractive box with a numbered certificate of authenticity. The special uncirculated is in a colourful and informative blisterpack.

The silver € 10 coin for the Benedictine Abbey of Seckau concludes the popular series of "Great Abbeys of Austria".

The coins may be ordered through the Austrian Mint website.