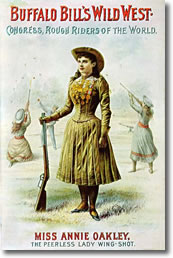 PBS’ History Detectives is dedicated to exploring historical mysteries that will, on Monday, investigate whether a 1853 French Napoleon coin was split by sharpshooter Annie Oakley.

And here’s where we return to Monday’s first History Detectives episode of season 6. Host Elyse Luray will take viewers through an investigative journey to try and uncover whether an inherited Napoleon coin full of family lore was indeed shot by Oakley.

Imagine the value of the Napoleon coin should evidence support the lore.

A video sneak peak of Season 6 highlights a portion of the show, where Luray "conducts ballistics tests, scours the Buffalo Bill Historical Center archives and recreates one of Oakley’s sure shots."

View the PBS information page for the episode at:

For a local listing of times, visit: